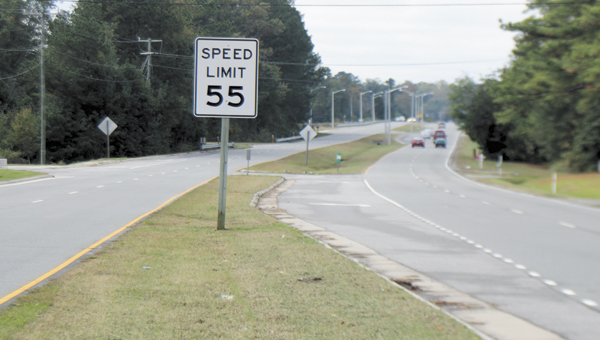 Opposite the AAA office on Bridge Road — or Route 17 — in Suffolk, the speed limit changes from 45 to 55 miles per hour for northbound traffic, and the opposite for travelers southbound. After completing a speed study, Suffolk is making the speed limit 45 mph on the entire road within city limits.

The daily commute for many down Route 17 is about to get longer after a speed study resulted in a decision to lower 55 mile-per-hour sections within the city of Suffolk to 45 mph.

The change will occur Nov. 15 after the city’s Public Works and Police departments, based on results of the study, recommended changing the speed limit to 45 mph for all of Bridge Road within Suffolk city limits, a city news release states.

Temporary signage will be installed to alert drivers to the change.

“It will save a whole lot of accidents.”

Clee Grasmick said she thought the speed limit on the road through Suffolk was already 45 mph all the way. Removing the need for drivers to constantly alter their speed up and down is a good idea, she said.

“There is no difference in the neighborhoods and the grocery stores,” Grasmick added. “It’s not as if you’re going through open country then getting back into the city.”

But not every motorist surveyed at points along Route 17 in Suffolk Wednesday was such a fan of lowering the speed limit.

“Let’s keep it the way it is, if people stick to it,” Bob Katz opined, adding he regularly sees cars speed up in 45-mph sections before reaching 55-mph zones.

Dee Holland believes the road is safe and modern enough to support 55 mph. “I think most people drive around that speed, anyway,” she said. “I don’t know what their rationale is to lower it — maybe it’s adequate to support it.”

The city’s Department of Public Works Traffic Engineering Division completed the study supporting the speed limit revision as part of a “periodic review of the roadway,” according to the news release.

Route 17 in Suffolk, between the Chesapeake city and Isle of Wight County lines is seven miles long.

Grasmick said she lives off Bennett’s Pasture Road and travels Route 17 in Suffolk “probably 90 percent of the time when I leave my home.”

“It doesn’t really matter what you post — people are going to go over the speed limit,” she said.

“But it’s (45 mph) probably a better idea, because there are so many stop lights. I can live with (it).”