Pie on her face … for a good cause

The principal of Kilby Shores Elementary School took more than one for the team during Mounie Pie Day Friday.

To raise money for United Way, students, faculty and staff were invited to pay $2 for the privilege of throwing a shaving cream pie at Lori Mounie’s head. 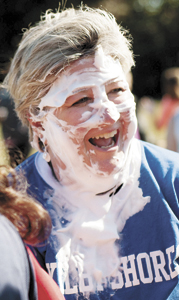 “There were approximately 193 pies thrown at her,” said Ellen Lee, the school’s United Way fundraising coordinator with Mary Regione.

What would have been an ordeal for most people went on for about two hours from start to finish, Lee said.

Students were split into two groups; kindergarten through second grade, and third through fifth grades; and members of each in turn were called upon to step up to the plate.

In some cases, Mounie had to actually encourage them.

“Some of the students were nervous about throwing a pie at her,” Lee said. “Some took great joy.”

“Some of the students had wonderful aim,” she said.

Mounie said, “It wasn’t really an ordeal. I like to get involved with the kids in everything that I do.”

She said she felt clean afterward, and smelled a little of aloe, adding, “The kids seemed to enjoy it.”

Together with several other activities through October, all designed to be a lot of fun for students, the pie throwing raised about $2,000 for United Way, Lee said.

United Way of South Hampton Roads funds food, shelter and preschool for low-income families; emergency services for victims of violence, and supports local military families when a parent is deployed.