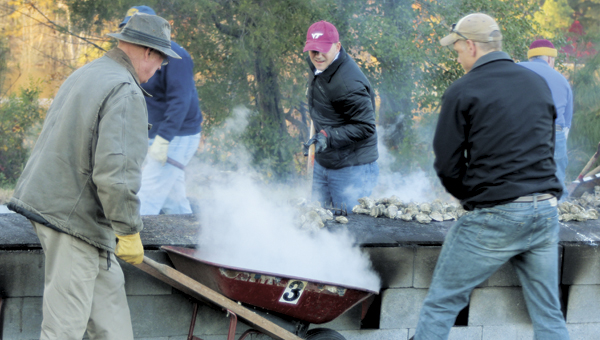 North Suffolk Rotary Club will hold its annual oyster roast Wednesday in Chuckatuck. Volunteer Brian Martin is pictured at last year’s event, waiting for his wheelbarrow to be loaded.

With mouthwatering mollusks the only morsel on the menu, the North Suffolk Rotary Club’s annual oyster roast Wednesday will be one for the purists.

The 12th installment of what president Wendy Hosick calls the club’s biggest fundraiser will be held on the grassy fields of Kirk Farm, off Everets Road.

Tickets are the same price they’ve been for years — $25 each — covering oysters and beverages, including beer and wine.

“If you don’t enjoy oysters, then I wouldn’t come, because that is what we serve,” Hosick said. “We don’t serve hotdogs and hamburgers — we serve oysters.”

Over the years, the event for many has become annual staple of Suffolk’s social calendar.

“There are people that have been coming from the very beginning,” Hosick said. “They just wouldn’t miss it.”

What keeps bringing them back, she said, is the good times and fellowship. Also, the regulars know that by purchasing a ticket or two, they’re supporting the various causes the Rotary club supports.

“All of our proceeds go to helping charities in the Suffolk area,” Hosick said.

Proceeds, for instance, purchase meals for the annual Stop Hunger Now program and benefit the H.E.R. Shelter, in support of women impacted by sexual and/or domestic violence. They’ve even helped spruce of the Eclipse ball field, where club members built a picnic shelter and made other improvements.

“That’s just a few of the charities that we deal with,” Hosick said. “We also co-sponsor the Suffolk First Citizen event with the downtown Suffolk club. It costs money to do, and while selling tickets supports it, we have to pay for it up front.”

The club’s international projects have included supporting a school in Africa, she said.

Hosick said attendees at Wednesday’s event will consume a box truckload of oysters. “The guy in our club who handles the purchase of them always knows just where to go to get the best oysters — and when,” she said.

While oysters are the undeniable star, the event will also include a 50/50 raffle, and another raffle for a wheelbarrow full of goodies “all of us would like to win.”

Hosick said the annual fundraiser is akin “to a small hometown restaurant that seems to thrive when times are bad.”

“No one goes there and doesn’t have a good time,” she said. “There’s lots of laughing, and it’s just an eclectic mix.”