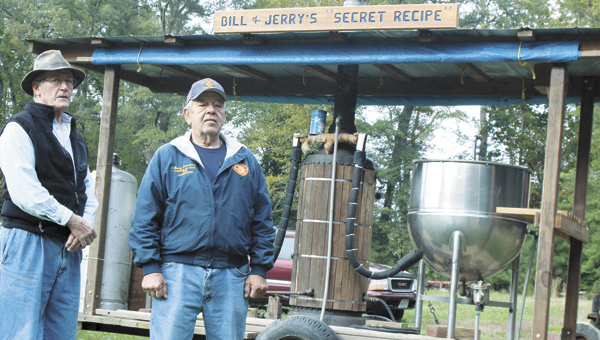 Bill and Jerry Saunders of the Chuckatuck Ruritan Club stand with the steam cooker they’ll haul to Oakland Christian Church for Saturday’s Fall Fest. The men are the “keepers” of the contraption, which will be used to cook Brunswick stew for the church event.

Bill and Jerry Saunders are the “keepers” of a two-pot steam cooker that will be wheeled out for Oakland Christian Church’s Fall Fest Saturday.

“Jerry and I have been the keepers of this thing,” Bill Saunders said, explaining they aren’t related, despite sharing a name. “You could make whiskey with it — with a little bit of modification.”

Before it came into the possession of the Ruritans, Jerry Saunders said, a “Mr. West owned it, up at Windsor.”

West would take the trailer-bound contraption to the State Fair in Richmond every year to cook Brunswick stew, he said.

While the contraption is also used to cook clam chowder at the club’s oyster roasts, Brunswick stew will be on the menu at Saturday’s church event.

In fact, along with homemade candy, the stew is the highlight of the annual event, said Denise Spady, its co-chair.

“We all get together at four or five in the morning and start brewing,” Spady said, adding the Ruritans’ cooker “helps us make a massive amount of stew” — about 80 gallons.

At full capacity, with both pots boiling away, the cooker produces 135 gallons, Jim Saunders said.

The adapted, propane-heated laundry boiler perched on the trailer between them feeds about 12 pounds of steam into the double-bottomed pots, he said. The steam is injected into the space between the bottoms.

Jerry Saunders said he and Bill made a few changes to the cooker. They installed new steam pipes and valves, as well as water traps, and built the roof over it that helps it pass regular state inspections.

The Ruritans have used the cooker at community events for a number of years now, and the regulars are used to it, but it still attracts attention.

“There’s always someone who comes in and wants to know something about it,” Jim Saunders said.

Spady said the cooker is sure to attract attention Saturday at the church, 5641 Godwin Blvd.

From 9 a.m. to 2 p.m., the event will also include a silent auction, bake sale tables, farmer’s market, outside vendors and more. Entry is free, Spady said, with money raised by selling goods.

“It’s just a fundraiser that we have done for many years,” she said. “All the proceeds go back into the community in one way or another.”

Girls Scouts will also raise their own money during the event by holding a yard sale out front, Spady said.

A group of beekeepers will sell honey and, depending on the weather, may bring a sample of a beehive, she said.

The major raffle prize will be a gourmet dinner for eight by the Rev. Gregory and wife Terry Ryan. “They will come to the winner’s home or it will be at their home — it’s the winner’s choice,” Spady said.