Lamont Brown III was a force on the gridiron for four years with Nansemond River High School, and now he’s taking Suffolk on the road. 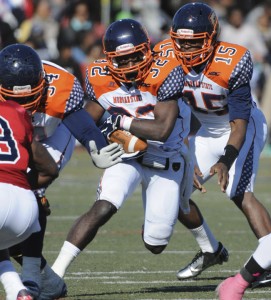 Former Nansemond River High School star Lamont Brown III has made the Division I college football field his home as a running back at Morgan State University.

Eight games into the season, Brown leads the Division I football team at Morgan State University in rushing yardage. Though the Bears (2-6, 2-2) have struggled this year, the redshirt freshman has 466 yards and two touchdowns on 102 carries.

He said when he first arrived in Baltimore in 2012 to join the team, the decision was made that he should redshirt, in part, because there were other people in front of him on the depth chart who could get the job done for the time being.

He said he used to be the workhorse with the Warriors, so the Bears coaches told him, “You take this year to get your body back, and next year it’s going to be on you again.”

Now that next year has come around, Brown has proven he’s ready.

“I got adjusted fast,” he said. “I was able to do the same things here that I was at Nansemond River,” and that means he has been a productive running back.

Morgan State head coach Donald Hill-Eley has had several good reasons to anticipate Brown being a key contributor. Hill-Eley too hails from Suffolk, having graduated from John Yeates High School in 1987. He played football under a notable defensive coordinator he said was like a second father to him — Thomas McLemore, now Nansemond River’s principal.

Hill-Eley was also aware of Brown’s success in high school. The coach said it can be hard to predict success translating to the college level, but he had high expectations for Brown.

“He’s coming into his own,” Hill-Eley said, highlighting how he is “starting to show you what type of runner he is.”

He gains tough yards between the tackles and has become increasingly consistent in the last few weeks, with 88-, 98- and 88-yard games.

Hill-Eley said he has gone from being simply a freshman taking the field to a guy popping up on opposing teams’ scouting reports as a player to stop.

Brown’s key contributions come off the field, as well.

One consequence of this is “he’s taken on the role of being a leader, regardless of being a first-time player,” the coach said.

This is particularly important because there are true freshmen on the running back depth chart who can benefit from Brown’s influence.

Brown said having the kind of success he has seen at the D-I college level makes him grateful for his high school coaches who believed in him enough to give him a chance and pour lots of time into his development.

“I’m trying to give them back everything they put in me, if not more,” he said.

“We’re proud of him here,” Nansemond River head coach Tracey Parker said. “He started for us as a freshman and played every year and played well for us.”

Parker said Brown worked out with the Warriors during the summer, so they could see the hard work he was putting in.

“It kind of makes you feel good to know you had some part of that both physically and academically,” Parker said.

“We all try to help each other out the best way we can,” Brown said.

“That’s my home, that’s where I have to come back to,” Brown said of Suffolk.

Brown has some things he would like to bring home with him at the end of his redshirt freshman year. He has set the goal of becoming Mid-Eastern Athletic Conference freshman of the year and player of the year, along with being a 1,000-yard rusher.

He would also love to be able to get a MEAC championship for his senior teammates.

Four games remain on the regular season schedule for Brown and the Bears. The next contest will be at home this Saturday against Hampton University.