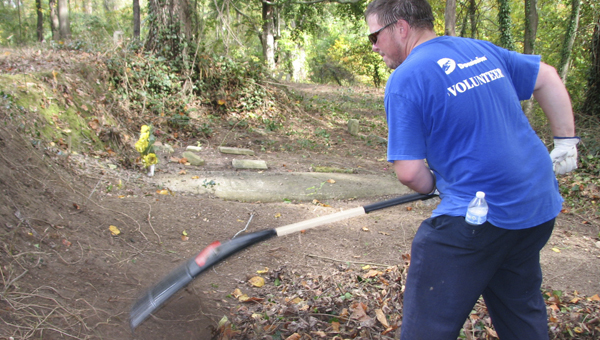 Zachary Marks clears one of the tiers of Oaklawn Cemetery that steps down to a ravine. He was one of many Dominion volunteers who worked in the once-neglected cemetery.

A cemetery usually isn’t the best place to be on Halloween night, so Dominion Virginia Power volunteers showed up early on Thursday and finished up their work before dark.

About 50 employees from the power company did a cleanup project at Oaklawn Cemetery on Market Street. They stayed for most of the day, trimming trees, grinding stumps, raking leaves, cutting grass and clearing overgrown portions of the cemetery.

“I love it,” said George Richards, a 90-year-old local who has helped spearhead efforts to clean up the formerly neglected cemetery. “I knew they were coming, but I had no idea they were coming with the equipment they brought and the number of people.” 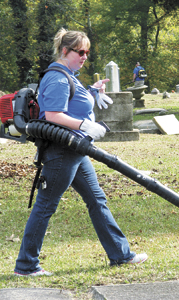 A historically black cemetery, Oaklawn is located on a corner lot behind the city’s Human Resources building at 440 Market St. It holds the remains of many veterans, business owners, ministers, civic leaders and other prominent citizens. Some of the graves date to the 1800s.

Richards gave volunteers a history lesson in the midst of all the rakes and leaf blowers on Wednesday. His grandparents and other relatives are buried there, as well as former mayor Moses Riddick, Phoenix Bank president J.W. Richardson, and the Rev. W.W. Gaines of First Baptist Church Mahan Street, who also started the Nansemond Collegiate Institute for black students.

Tracy Stewart, who grew up nearby, started cleaning up the cemetery a couple years ago and founded the Historic Oaklawn Cemetery Foundation to take donations to help with the process.

The cemetery consists of a main level, plus three other levels that step down into a ravine. The three lower levels are the most overgrown, and volunteers uncovered gravestones throughout the morning as they cleared the brush.

Bonita Harris, media and community relations manager for Dominion, said the company initially was looking to do a holiday project and plans a wreath-laying ceremony for the veterans’ graves at Oaklawn on Dec. 14.

“But we want to do more than just show up on the holidays,” she said. “Community service is very important to Dominion.”

Several employees already had approached her about working in the cemetery regularly, she said.

“We’ve just had so much interest,” she said. “Most of these folks come from Suffolk and Chesapeake.”