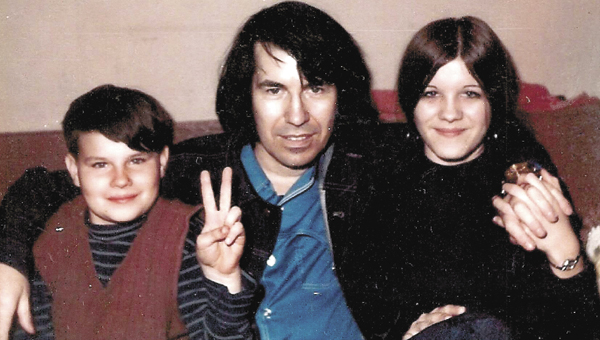 If you’re unfamiliar with the name Link Wray, you’ve almost definitely heard what his pioneering guitar work gave rise to.

If you listen to rock on the radio, you probably hear it every day.

Beth Webb’s father was one of those seminal guitarists who did things no one had done before, at least not on a record.

His particular gift to the world: the power chord. It was a revolution on 1958’s “Rumble,” long before Kurt Cobain, Neil Young, Pete Townsend or anyone else of that general ilk pressed two fingers to a fret board.

“Pete Townsend said if it wasn’t for Link Wray, he wouldn’t have picked up a guitar,” according to Webb.

Today, Wray’s 59-year-old daughter lives a quiet life in Carrollton with husband Tommy Webb. But when the eldest of eight was born in Portsmouth, her life was a little less quiet.

Beth Webb was only about 3 weeks old when Fred Lincoln “Link” Wray Jr. carted the family off to D.C. to pursue his rock ‘n’ roll dreams.

In Portsmouth, he “drove a cab and played music — western swing,” Webb said.  But he wanted a different sound, so they decided to move. “The south wasn’t ready for rock. He wouldn’t let anybody tell him how to play rock and roll.”

During a half-century career, touring all the time, through a divorce in about 1965 — according to his daughter — and even after following a new woman to Denmark to live in the 1980s, Wray accumulated a string of accolades.

His music is heard in television and film, including “Pulp Fiction,” “Independence Day,” “Desperado” and “The Sopranos.”

Recently, the Rock and Roll Hall of Fame announced Wray as one of 16 nominees for its 2014 class.

Ironically, he’s competing against several beneficiaries of his guitar trailblazing, including Nirvana, Deep Purple, Kiss and NWA — all of them contemporary purveyors of the power chord.

Cat Stevens, Linda Ronstadt and Peter Gabriel are also among those in the running with the former Portsmouth cabbie.

Inviting fans to vote for his inclusion in the rock pantheon at www.rockhall.com, Webb says her father is more deserving than many other nominees for his reverberating influence on rock and its subgenres, including metal and punk.

Webb says her father’s life was his music. After contracting tuberculosis in the Korean War and losing a lung, Wray had been told by a doctor that he’d never play guitar and sing again, his daughter said.

She believes his Native American blood “gave him the will and the strength to keep on going. He rock-and-rolled all the way up until he died.”

Beth Webb said the last time she saw her father alive, she had traveled to San Diego in July 1997 with her son, Chris Webb, to see him perform.

When she approached him from the audience, “a bouncer got between us,” she said.

“I said, ‘Daddy, tell this fool who I am!’ He said, ‘Beth, is that you?’ He took his guitar strap off with his name on it and gave it to Chris.”

Chris Webb, himself a musician, treasures the gift from his grandfather, his mother said.

It was the first time Webb had seen her father in about a decade, she said, adding, “But he (had) called me a couple of times.”

Webb said her aging rocker father was “tickled pink” by the fleeting reunion.

“I always idolized my dad; I was always Daddy’s little girl,” Webb said. “He was always there for me, (even) when he wasn’t there, if that makes sense.”