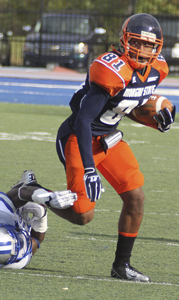 Jefferson, a true freshman wide receiver, most recently provided a critical 9-yard touchdown reception in the fourth quarter against visiting North Carolina A&T State University. The score closed the Bears’ deficit to 23-21 and helped lead to a 24-23 conference win on a last-second field goal.

“I just felt like the team needed me to step up,” Jefferson said of the catch. He ended up with three catches for 67 yards in the game, which improved the Bears to 4-6 overall and 4-2 in the Mid-Eastern Athletic Conference.

In the game before against visiting Hampton University, he posted his best numbers ever with six catches for 140 yards in a 30-27 conference win.

“We knew recruiting him out of high school that he was a high impact type guy that would definitely be able to help us right away,” Bears head coach Donald Hill-Eley said.

The coach said Jefferson’s play has helped open up the run game because defenses now have to account for him by pulling a man out of the box. It also allows redshirt freshman and team-leading receiver Thomas Martin to see more single coverage.

Martin has 24 receptions for 320 yards this season, and Jefferson is not far behind, with 302 yards and two scores off 17 catches.

Jefferson described how the college level is different from high school football.

“It gets faster,” he said. “You have to pay more attention to the little details, and it’s all about just having confidence in yourself.”

He admitted he did not have much confidence coming into his freshman year. He said he thought he was going to redshirt and take the year to get bigger, stronger and ready for the future.

He started off slow, but once he learned the offensive playbook, he said, “I got comfortable. I felt like I could be ready to play this year.”

He said what really helped him were the “coaches telling me that I could be good.”

Hill-Eley, who is also from Suffolk, has known of Jefferson for some time. “Antonio actually grew up in my neighborhood.”

Last year, the coach made a couple of trips home to watch Jefferson play during his senior year at Lakeland. He said every time Jefferson touched the ball, he could tell he wanted it and had a chance to score. Hill-Eley returned to see the Cavaliers’ playoff game against King’s Fork High School.

“When I went back to watch him again, he had that same type of explosiveness,” Hill-Eley said.

Jefferson said what he did for Lakeland and what he does for Morgan State are similar.

“I kind of look at it the same way,” he said. “Go out there and make plays when my number’s called.”

Though he has found his comfort zone early in Baltimore, his mind constantly returns to his family and friends at home as motivation to play hard.

“That’s all I think about on that field,” he said.

The trio and the rest of the Bears will take on host South Carolina State University tonight at 7:30 p.m. in a game that will be televised on ESPNU.