The 2013-14 season will be one of change for Suffolk Christian Academy’s girls’ basketball team.

Kristy Patton decided to step down as head coach of the Lady Knights. 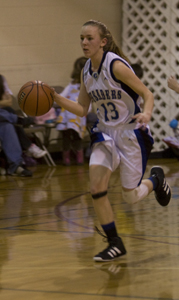 Suffolk Christian Academy senior Jenny Rombs will be assuming the starting point guard position for the Lady Knights this season.

“Coach Patton just was coming to a time where she wanted to spend more time with her family and be a part of her kids’ sports,” SCA athletic director Steven Milner said. “It just felt like this was the best timing to go ahead and make that transition.”

A lot of the girls coming up to the varsity level this year had not previously been under Patton’s leadership. Consequently, the break in continuity that can arise from coaching change will be minimal.

Tom Powell will take over as head coach, after prayerfully considering an offer from Milner. Powell’s children used to attend Suffolk Christian, and though they are now home schooled, they still compete on SCA sports teams.

“I will be a rookie at coaching basketball,” Powell said, but he has experience as a basketball player. He played in high school for Suffolk Christian conference rival Gateway Christian School and played intramural basketball at Pensacola Christian College.

Powell has also coached other sports like soccer at the recreational level.

Milner said in the course of the three years he has known Powell, “he’s shown a knowledge for the game, and I know his hard work ethic would make him study,” helping him become even more of a student of the game so he can “train the girls in the direction they need to go.”

The Lady Knights went 4-14 overall last season, 1-9 in the conference.

Powell is pleased with the team’s existing talent base. There are 10 players at the varsity level and two that will swing up from junior varsity.

Powell’s initial expectations have been for the squad to break bad habits and also get back to the fundamentals.

“Blocking out, rebounding and passing are really my top three priorities,” he said.

Conditioning is another objective, as the team is running four and a half to five miles during the course of each practice.

He expects leadership from seniors Jenny Rombs and Caitlin Hankins, the team’s co-captains.

Pegged by Powell for her ball handling skills, Rombs will be taking the role of point guard.

“She will be our quarterback for the offense,” he said. “This is a new position for her, and she was reluctant when I asked her, but so far she’s done a fantastic job.”

Hankins will continue her role from last year at center. Powell said she will be a model for other girls to follow down low.

He said the team does not have a lot of height but would have to rely on its strength.

Two ninth-graders are the leading examples of the promising youth on the team. Powell said as the next couple of years progress, he is expecting some good things from his daughter, Julia Powell. She is already tall, and he said she is going to be very good blocking out and rebounding.

The other freshman up-and-comer is point guard Grace Fowler.

“Grace has got really good speed, probably the fastest on our team this year. So, she shows some good signs of growing into that role,” Powell said.

Though he has yet to see the competition, Powell said what he has seen from his team leaves him optimistic for a winning season. “I will coach with that expectation,” he said.

SCA opens the season at home, 4:30 p.m. on Tuesday against Victory Christian School.