When folks ride past the Rev. Wayne and Judy Gardner’s Northbrooke Avenue home for the first time, two giant ferns sitting on their porch often elicit a double take. 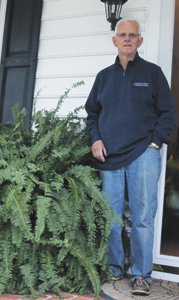 The Rev. Wayne Gardner, 74, shows off the large ferns growing on his front porch, which he says often attract attention from passersby.

Gardner, who retired from the United Church of Christ in 2003, said he took to gardening about six years ago.

Apart from the two Jurassic Park ferns either side of the front door, other horticultural curiosities at the Gardner residence include a very micro banana tree plantation, a significantly larger grove of rose bushes, and eucalyptus trees.

“This is their third year,” the 74-year-old master gardener said of the Boston Ferns, explaining he picked them up from “a little nursery” in Murfreesboro, N.C.

“I’ve had to re-pot them two or three times. They get a gallon of water each a week.”

They’ve always been at the front door, he said, adding, “They’re very happy, evidently, right there.”

Two or three admirers have knocked on the door inquiring about the ferns, Gardner said.