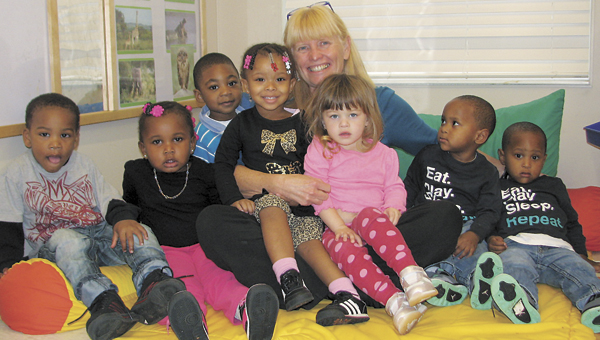 Rosalind Cutchins, the new executive director of the Children’s Center, visits a classroom at the Suffolk location off Wilroy Road on Thursday. With her, from left, are D’john Mabrey, Makayla Shaw, Trayvion Flood, Jada Barnes, Adalyn Walck and Daylen and Dashawn Parker.

The Children’s Center has grown from a program with a staff of 10 that met in a Sunday school classroom to a number of programs operating in eight buildings with a staff of more than 200 that served more than 1,300 children last year.

Like the recently retired executive director Barbara Mease, her replacement, Rosalind Cutchins, has been with the program every step of the way.

“I originally came as a part of my grad school internship and worked into a job,” Cutchins said recently. “All that just kind of worked itself out.”

“Children learn best in a diverse environment,” Cutchins said. “It’s an exciting time for us as we are growing and settling into services. There is a burst of energy and research into brain development for early childhood.”

“If we can get it right early in youth and in childhood programs, the children have such a higher chance of being successful,” she said. “If we have to fix things on the other end, it’s harder for the child, harder for the family, harder for all of our systems.”

Cutchins is a native of the area, having graduated from Southampton High School. She earned a bachelor’s degree in therapeutic recreation from Longwood College (now University) and a master’s degree in recreation administration with an emphasis on therapeutics from the University of North Carolina at Chapel Hill.

Cutchins said she appreciates the support the Children’s Center has received from the community.

“We’re certainly very thankful to our community, for those who believed in us 30 years ago and those who continue to believe in us into the future.”

Cutchins’ permanent office is in Franklin, but she is at the Suffolk location frequently.