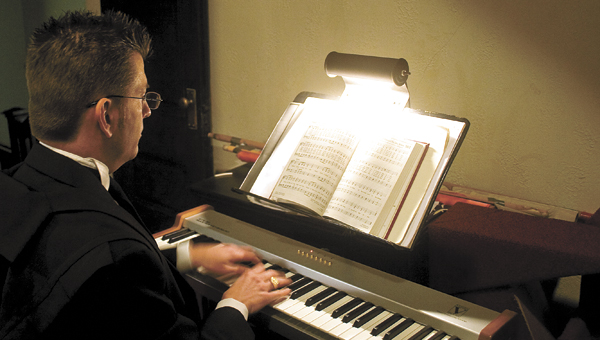 Suffolk resident Sean Bilby is the chimes master at Suffolk Christian Church, where his duties include helping to program the music that is played on the church’s 61-note digital carillon system.

Maybe your church has a nice praise band. Maybe they use electric guitars and drums as backup. Maybe there is a bell in the bell tower and a handbell choir that performs selections for various holy days throughout the year.

But does your church’s music ministry send its peal into the surrounding community each day, proclaiming the gospel in the dulcet tones of bells chiming beloved hymns, some well-known and others seldom-heard?

The music ministry at Suffolk Christian Church does it every day, broadcasting hourly chimes every day from 9 a.m. to 9 p.m., along with musical selections each day.

The music emanates from speakers installed at the top of the church’s bell tower, but it originates from an electronic keyboard located in a cold little room off the side of the circa 1892 sanctuary, where the surprisingly small setup for the church’s 61-note digital carillon is located.

A carillon, according to the Guild of Carillonneurs in North America, is a “musical instrument composed of at least 23 carillon bells, arranged in chromatic sequence, so tuned as to produce concordant harmony when many bells are sounded together. A digital carillon achieves much the same effect without the actual bells.

Suffolk Christian’s digital carillon is one of five in the city — others can be found at Bethlehem Christian Church, Ebenezer United Methodist Church, Liberty Spring Christian Church and Suffolk Presbyterian Church — but it has arguably the largest daily audience, considering its location right at the heart of the downtown business district.

“There has been a carillon on Main Street for a long time,” says Sean Bilby, the chimes master at Suffolk Christian.

In fact, this is the third “electric carillon system” the church has had, according to its historic records. The first was given to the church in 1963 by Emmett H. Rawles in memory of his uncle, Judge Richard Henry Rawles. In 1993, Emmett Rawles Jr. presented the church a new system in memory of Emmet H. Rawles and Katherine H. Rawles. A 2011 electrical storm damaged that system beyond repair, and a bequest by Annie Maude and Clarence “Red” Jones allowed the church to install the latest one.

Bilby develops the program of music for the instrument and coordinates with a few other church members to record songs or even play them live.

Between the recorded songs that came with the system, the songs members of the music ministry record and the ones they play live, there is a variety of music available for the five or so selections heard daily throughout downtown Suffolk.

Secular arrangements have ranged from the “Linus and Lucy” theme song from “Peanuts” in support of the Peanut Fest Parade to music from the Harry Potter series for Halloween to a special 10-bell pattern marking the anniversary of the War of 1812.

Bilby says the live performances can be especially nerve-wracking, as any mistake will be heard by folks all over downtown.

“You just know you have to get it perfectly right,” Bilby says.

He gets a bit of practice each week playing a 10-bell chime live at noon on Wednesdays at Freemason Street Baptist Church in Norfolk, where he is a librarian for the Norfolk Public Library.

He also works on the carillon program at Suffolk Christian “nearly every week” to ensure that it’s appropriate and euphonious.

The carillon, he says, “can be a point of civic pride. I think the sound of the bells is an ancient part of the cityscape in any town, whether in Europe, Asia or America.”

For a schedule and more information about the carillon, visit the music ministry page at www.suffolkchristian.org. ←