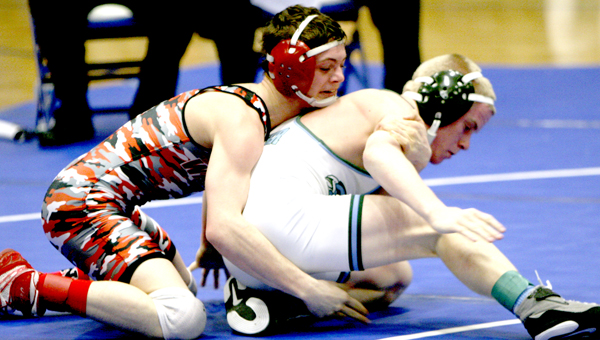 The Nansemond River High School wrestling team, led by senior Nick Garland and junior Leon Lynch, made Saturday historic for the program by capturing the Group 4A South regional championship. The Warriors finished 25 points ahead of their nearest competition in a field of 25 different schools represented in the event at Woodrow Wilson High School.

“It’s a huge accomplishment as a program and as a coach to win that tournament,” NR head coach Tripp Seed said of the regional-level competition. “It’s never been done in school history.”

“I have a great group of kids,” Seed said. His team faced a lot of adversity this season, but he said, “We’re peaking at the right time right now.”

With all 14 of his wrestlers qualifying for the event, Seed said, “We expected to win it.” But to actually make it happen, he said, “We’ve got to put six kids in the finals.”

“This feels great,” Garland said shortly after having pinned Hanover sophomore Tyler Flora in the second round. “I’ve worked my whole life for this.”

Garland identified the importance of constant motion against Flora.

“The key to winning that match is just not stopping,” he said.

“He’s wrestling like he has something to prove,” the coach said. “He’s got his mind in the right place.”

Garland improved to 31-7 on the season and advances to this weekend’s state championships along with the other five Warriors wrestlers to finish within the top four of their weight classes.

Lynch improved to 29-5 this season with the decision over Wilson sophomore Nairobi Windley. The first two-minute round was scoreless, and Lynch trailed 2-1 after the second, but came back in the fourth to win 4-2.

“The kid was really strong, but the stamina decided the match, probably,” Lynch said.

Lynch and his teammates are required to start practice with a 30-minute match, including no breaks, to improve conditioning.

The coach said Lynch “wrestled a good, smart match,” going up against “a strong athletic kid who doesn’t make a lot of mistakes.”

Seed also complimented the performances of some of his other wrestlers, including junior 132-pounder Hunter Hill and junior 138-pounder Jacob Clark.

Along with Clark, senior 195-pounder Mike Carlin rounded out the eight Warriors to finish in the top five of their weight classes.

Now Seed and his team set their sights on the state championships.

The Group 4A state championships take place on Friday and Saturday at the Salem Civic Center in Salem.

Just wondering about a few things