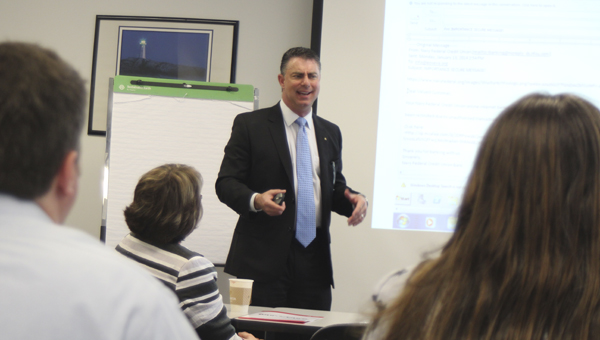 At ODU’s Tri-Cities Center Tuesday, Martin Joseph, president of 360IT Partners, speaks to Suffolk members of the Hampton Roads Chamber of Commerce on the importance of cyber security for small and medium businesses.

Malware, spyware, ransomware, botnets, cryptolocker … the terminology of computer hacking is enough to give the owner of any small or medium business a coronary.

They are words a Virginia Beach IT expert used liberally during a Hampton Roads Chamber of Commerce event in North Suffolk Tuesday.

Martin Joseph is president of 360IT Partners, which sets up and then manages computer systems for small to medium businesses; he was guest speaker at the Chamber’s Suffolk Membership Committee meeting, held at Old Dominion University’s Tri-Cities Center.

The talk came as things like the Edward Snowden-National Security Administration leaks, and theft from Target of the personal and bank information of 40 million customers, have placed cyber security and big data front and center.

“The Internet has become somewhat of a cesspool for criminals, and the criminals are smarter than our law enforcement,” Joseph warned. “Quite frankly, there’s become so much criminal activity, the law enforcement says they can’t take care of it in time.”

Sixty percent of small businesses close within six months of a data breach, according to a study Joseph cited.

Folks need to be careful before clicking on anything, he said. “Question everything.”

The IT entrepreneur drew gasps when he described one example of ransomware: An app allowed users to download and view pornography, then used their smartphone’s camera to record them consuming the material. They then were advised that images or video of them would be distributed to their contact list unless a ransom was paid.

Joseph recommended caution when downloading apps. For instance, he said, something’s probably up if a flashlight app requests access to your phone’s location.

Joseph’s main messages were to exercise caution before clicking or downloading, and to use various anti-virus and patch management software to create a firewall.