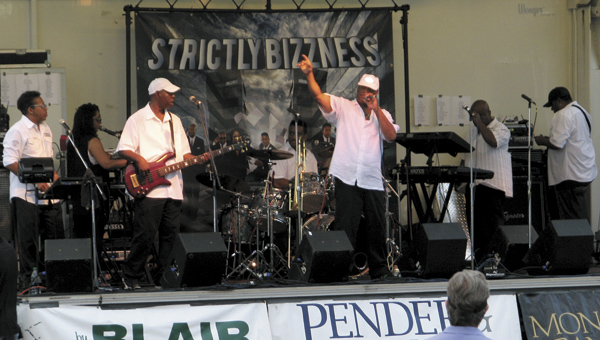 Strictly Bizzness plays at a TGIF concert last year at Constant’s Wharf. They will perform at the TGIF concert on June 27 this year.

The musical celebration will take place on Fridays throughout the summer, with the exception of July 4 — which will feature the Stars and Stripes Spectacular in its place — and July 25, when the series takes a break to head north to Bennett’s Creek Park.

About 750 people come out to every concert, said Emily Upton with Suffolk Parks and Recreation.

Eight different bands are scheduled this year, with a special tribute to the 50th anniversary of the Beatles coming to America set for Aug. 15 with Beatle Mania Returns performing at Bennett’s Creek Park.

Every event includes children’s activities including bounce houses, as well as food, drink and merchandise vendors.

Tonight’s event is set aside as Business Appreciation Night, with business leaders especially invited. Affirmative Groove will be playing.

The full schedule is as follows:

This year’s presenting sponsor is Mike Duman Auto Sales, with other sponsors including Pender and Coward, Blair Brothers and Suffolk Insurance, Upton said.

Parks and Recreation is always on the lookout for new bands to feature, Upton said. The department collects interest from local bands through its website and also takes suggestions from concert visitors.

For more information about the TGIF concerts, visit www.suffolk-fun.com.