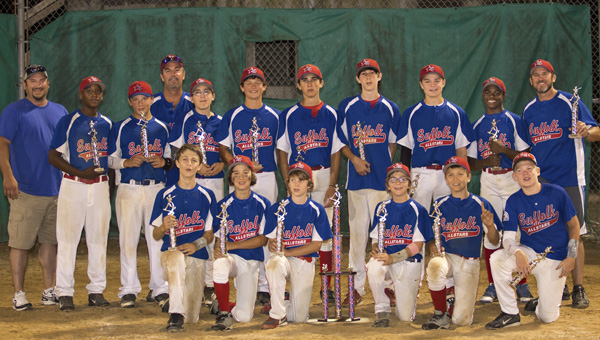 Mike Barnes, coach of the SYAA American team, said he was proud of his players’ accomplishment because though the game and the size of the field has grown with their advancing age, “They’re growing along with it.”

The SYAA team went 3-0 in pool play to advance against a 2-1 team from a Western Branch organization that Barnes said has always given his squad a run for its money. Both teams were in the 13U Pony sub-section, beating out 14U squads to advance.

In the final, “We scored two runs in the bottom of the first, which gave us momentum,” Barnes said, and the momentum never died.

He cited consistent hitting as what gave his team the edge.

“Every kid that was in the lineup responded well at the plate,” he said.

The game was tied 5-5 in the fifth inning when the American team got a huge lift from Chris Allen.

Barnes said, “He hit his first home run out of the park,” a three-run shot that made the score 8-5.

The coach praised Noah Floyd for being very competitive on the mound in relief of Adam Briggs.

Then, Barnes highlighted Jay Norris, whom he brought on to pitch in the top of the seventh, with one out, the score 8-7 and the bases loaded.

Norris caught a pop fly for the second out. The game’s final out came when a Western Branch runner tried to steal home. After some back-and-forth, catcher Gage Fesette tagged him out.

The SYAA Nationals went 5-0 in the SYAA Invitational. To win the final, they had to defeat a Western Branch Gold squad that had beaten them twice in earlier events.

The Nationals won on Monday by twice rallying back from five-run deficits, first 5-0 after the first inning, and later 11-6 after the third.

“I was extremely excited,” Nationals coach Frankie Haltom said of the win.

Haltom said the Nationals hit well almost every game, but the difference in the final “was the defensive display that we put on,” holding Western Branch scoreless in the sixth and final inning.

Praising his team as a whole for the success, Haltom also gave credit to his assistant coaches: Leo Pietila, Lenny Barbosa and Chip Runyon.

Both the SYAA American 13U team and the 8U Nationals will play in PONY Baseball sectional tournaments this weekend. The American team plays on Friday in Suffolk and the Nationals play on Saturday in Chesapeake.