Rivers and Maddrey lead the way 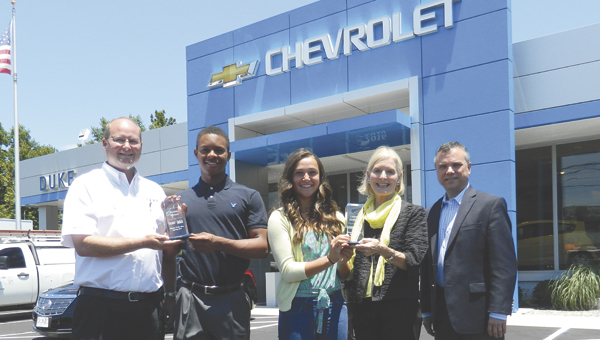 The Nansemond River High School Warriors were dominant this spring across multiple sports, including baseball and softball, and each of those strong teams had someone leading the way.

Junior shortstop Kieton Rivers and sophomore pitcher Lauren Maddrey revealed their leadership through a remarkable season of performances. For this, they were recognized as the male and female Duke Automotive-Suffolk News-Herald Spring Players of the Year.

“For Kieton and Lauren to have won as the Player of the Year is a really great accomplishment for both of them,” Duke Automotive vice president Eley Duke said following the presentation of the awards at the dealership on Monday.

During the ceremony, Lydia Duke, president of Duke Automotive, offered prudent advice to Rivers and Maddrey to help prepare them for their future careers.

“They are the workforce of tomorrow,” Lydia Duke said after the ceremony.

Suffolk News-Herald publisher Steve Stewart was pleased to present the awards to the two athletes.

“Lauren and Kieton exemplify the qualities that Duke Automotive and the Suffolk News-Herald seek to recognize with the Player of the Year awards,” Stewart stated in an email. “Their on-the-field accomplishments speak for themselves, but equally impressive is the way they carry themselves off the field.”

During the regular season, he had 54 at-bats and a batting average of .481, tops among Warriors with at least seven at-bats. He also had 27 runs scored, 26 hits, eight doubles, 18 RBIs and 15 stolen bases.

“It all turned out how I thought it was supposed to turn out,” Rivers said of his season. “I met my goals.”

His mother, Benita Brown-Rivers, attended the presentation and alluded to his work ethic as a key to the year.

“I think that’s what’s gotten him this far, with my help nagging him,” she said. “He’s grown into a very nice young man.”

Maddrey led the Lady Warriors by going 19-3 on the mound, throwing 101 strikeouts and carrying an earned run average of 1.7. NR went 22-3 for the year, won its first-ever regional championship and reached the state semifinals for the first time since 1995.

“It’s just a really big honor,” Maddrey said of her award. She pointed to her teammates as the ones who gave her confidence as a pitcher when she said, “I just knew that I had a good defense behind me.”

Her father, Keith Maddrey, who was present on Monday with Lauren’s younger brother, said the team and Lauren exceeded his expectations.

Lauren, a talented outfielder, still does not see herself as a pitcher, but Keith Maddrey said he has told her, “Baby, you’re a pitcher, whether you want to admit it or not.”

Concluding the first year of Duke Automotive-Suffolk News-Herald Player of the Year awards, Lydia Duke said, “It’s been a beautiful year because we got to see young people in our community that have excelled.”