A parade of independence 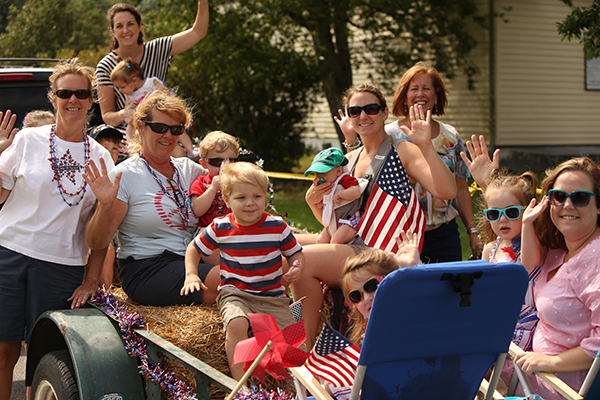 R.E. Spears III/Suffolk News-Herald
Susan McManus and family have participated in the Eclipse Fourth of July Parade for the past 10 years. They weren’t about the let this be the first year in a decade when they didn’t do so, even if there was a little wind from the departing Hurricane Arthur.

Call it the parade that wasn’t, even though it was — sort of.

With Hurricane Arthur headed out to sea — leaving behind little or no damage to Suffolk, which got brushed only by the storm’s outer bands — folks began heading to Eclipse for the annual Independence Day parade, a social fixture of the community’s summer calendar for decades.

Sharon McManus and her family filled an open landscaping trailer hitched to the rear of a pickup truck parked in a short line of vehicles near Ebenezer United Methodist Church.

Wind whipped flags to full attention, but the sky was clearing of the hurricane scud.

“We have done this for the last 10 years,” she said, explaining their decision to get dressed up in their best red-white-and-blue threads, decorate the trailer with garland and break out the flags, beads and pinwheels.

The problem? There was to be no parade.

“The church made a phone call this morning” to notify participants that the parade had been cancelled, she said.

“But the community turned out and decided we were going to do it, anyway.”

In fact, by the planned start time of 10:30 a.m., children and adults in patriotic garb lined Eclipse Drive to the CE&H Ruritan clubhouse, and there were confused and contradictory reports about what would happen.

The police cars that usually escort the parade were nowhere to be seen. Rumors circulated that the police department had called off the parade.

A group of horseback riders carrying flags, having staged and waited at the corner of Bridge Road and Eclipse Drive, finally rode by the clubhouse, on their own at about 10:15 a.m., followed by a horse trailer pulled by a pickup truck.

Back at the ball field, children and parents streamed through the gates and formed an impromptu line of gaily decorated bicycles.

Maybe there would be a parade, after all.

At about 10:40 a.m., an unidentified man walked to the fence surrounding the field and called for the crowd’s attention. Behind him, firefighters piled into a Suffolk fire truck that had been at the head of a short line of parade floats, and the truck drove away, back toward its base.

Maybe there would be no parade, after all.

“OK, everybody. Let me have your attention,” the man said, explaining that Suffolk officials had declined to allow the city’s police officers or firefighters to support the parade .

“I’m not telling everybody how to get home from here,” he added. “So if you want to walk home in a line along the road, that’s on you. This is not a parade. You’re just driving home slowly.”

With that declaration of independence, bicycles and golf carts and a couple of parade floats filed onto Eclipse Drive, and the Eclipse Fourth of July parade had begun.