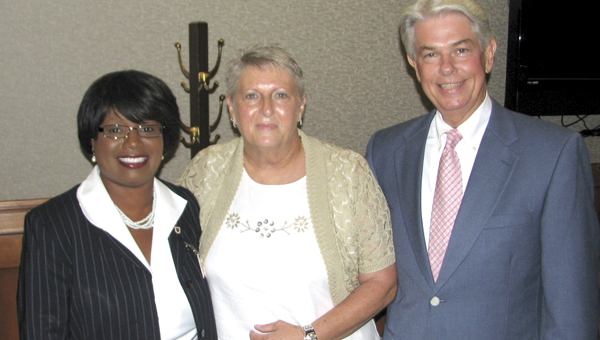 Sylvia Duck, center, celebrated her July 31 retirement on Thursday with City Manager Selena Cuffee-Glenn, left, and Treasurer Ron Williams. She is retiring as the deputy chief treasurer after 40 years of service to the city.

Even at her own retirement party, Sylvia Duck couldn’t stop serving others.

The 40-year employee of the Suffolk Treasurer’s Office neglected her own plate of food to pour lemonade for guests — until the line of city employees waiting to congratulate her grew so long it commanded her attention.

“I enjoy helping people,” Duck said of why she has enjoyed working at the treasurer’s office for so long. “It’s truly been an honor and a privilege.”

Duck, a Suffolk native, graduated from Forest Glen High School in 1970 and worked at American National Bank for three years. A family friend recommended her to then-treasurer, Bert Hazelwood, and she started her long career with the city.

“You’ve been part of history,” City Manager Selena Cuffee-Glenn said, noting Duck came on board less than a year after the city of Suffolk was formed. “You’ve seen us grow and develop.”

Duck retired as the chief deputy treasurer. She said her duties included running the office smoothly and supervising its employees.

“I’m there to make sure the office is run,” she said.

“You totally define what paying it forward means,” he said. “We are so grateful for your many years of service to the taxpayers.”

Williams said a law change in 1997 meant that in the event of his death, Duck would have taken over for him. Prior to that, the replacement would have been named by the Circuit Court.

“Since 1997, you have literally been a heartbeat away from being the treasurer for the city of Suffolk,” Williams said.

Duck said she has a lot of extended family among current and former city employees. Her husband, a former Suffolk police officer, also helped form that family through his work.

“Every day I’ve learned something new,” she said. “Every day, almost, I’ve met someone new because we have new residents coming in.”

Duck said she took service to heart while in the office.

“I feel like I’m a public servant, and I work for the citizens,” she said.

Duck plans to return in January to work part-time. In the meantime, “I’m just going to enjoy some down time,” she said.

She hopes to spend more time on the Outer Banks and volunteering, she added.