Suffolk native Dr. L.D. Britt has been recognized far and wide for his surgical expertise, and now he’s one of only a few surgeons worldwide who can claim honorary fellowship in each of the four Royal Colleges in the United Kingdom.

Britt recently was awarded an Honorary Fellowship in the Royal College of Surgeons in Glasgow, rounding out his awards from the other three Royal Colleges: England, Edinburg and Ireland. 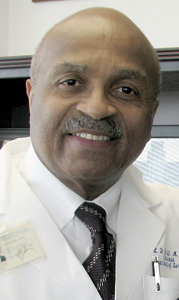 “I’m very fortunate,” Britt said. “I’ve dedicated my life to my discipline, and people have recognized that.”

He also recently accepted an appointment to the Board of Visitors at the University of Virginia, his alma mater.

After graduating as the valedictorian from Suffolk’s Booker T. Washington High School and receiving his bachelor’s degree from the University of Virginia, Britt went on to graduate from Harvard Medical School and the Harvard School of Public Health.

He currently serves as the Edward J. Brickhouse Chair in Surgery — the first black in the country to have an endowed chair in surgery — and the Henry Ford Professor of Surgery at Eastern Virginia Medical School in Norfolk.

He remains a practicing surgeon, performing numerous procedures each week ranging from emergency and trauma surgery to general surgery.

Britt said he sang Suffolk’s praises while in Scotland recently to receive the award.

“I enjoy going internationally and telling people about Suffolk,” he said. “I try to be a one-man Chamber of Commerce when I travel.”

Britt said he was honored by the award.

“It’s a real honor,” he said. “It’s unusual to get that sort of award. They’ve recognized what I’ve done in American surgery, not only in this country but internationally.”

Britt has been instrumental in instructing the next generation of surgeons, as well. He was editor-in-chief of the first textbook on a new surgical specialty — acute care surgery, which combines emergency, critical care, trauma and general surgery.

He has served terms as president of both the American College of Surgeons and the American Association for the Surgery of Trauma.

He serves outside of the surgery world, too. He is a former rector and member of the Norfolk State University Board of Visitors, is a member of the Jefferson Scholars Regional Selection Committee, is trustee emeritus of the College and Graduate School of Arts and Sciences Foundation and is a graduate of the Political Leaders Program at the U.Va. Sorensen Institute for Political Leadership. He recently joined the Board of Trustees for Boys Town.

“I’m very thrilled to be on that board,” he said.

He has also participated in more than 180 visiting professorships and lectureships throughout the world and has authored dozens of articles and book chapters.