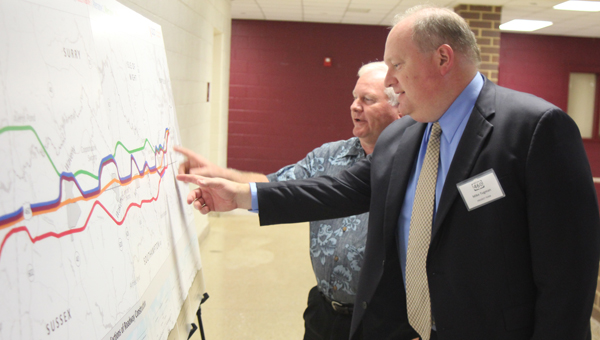 Presentation: During a public meeting on the Route 460 project, held at King’s Fork High School on Thursday, Suffolk’s Alvin Anderson Jr. and Mike Tugman, a consultant project manager with VDOT, review design alternatives for improving the road between Suffolk and Petersburg.

Citizens vented their frustrations during the final of five town hall meetings Thursday on VDOT’s efforts to re-evaluate the controversial Route 460 project.

At King’s Fork High School, the format was identical to the previous meetings, held in other communities between Suffolk and Petersburg.

Led by project manager Philip Rinehart, VDOT officials updated folks on the reassessment of three design alternatives and analysis of two new alternatives, and they explained the process going forward.

The proposals create either a new 55-mile road north or south of the existing 460, or rework the existing road in different ways. Only one option — simply improving the safety standards of what’s there now — wouldn’t bypass six communities.

During about 45 minutes of questions, most people wanted to know why so much money would be spent on a road they don’t consider congested.

“From the time I heard about the 460 project, I kind of scratched my head,” one man said.

“One of the biggest concerns of the citizens of Hampton Roads is traffic congestion. I’m kind of a veteran of driving in this area … and I think Route 460 pales in comparison to the other problems we face.”

“(Route) 460 never gets backed up,” another man said. “I think money needs to be spent to get additional crossings from the Peninsula to Norfolk.”

This man touched on another common theme through the meeting — “poor” decisions by officials in Richmond affecting everyday folks. “If you took a vote of the people affected by this, who live in the area, it would be a strong ‘no,’” he said.

Mark Geduldig-Yatrofsky, among many from Portsmouth in the roughly 120-strong audience, questioned the rationale that improving 460 would provide a much-needed evacuation route for Hampton Roads and northeast North Carolina.

According to Geduldig-Yatrofsky, Route 58 would be more logical than channeling fleeing families toward Richmond, where traffic would just bottleneck.

He also said that providing a fast commuter route into Hampton Roads from the rural areas alongside 460 would channel urban sprawl into places without adequate infrastructure.

“That, to me, would be a horrible outcome,” Geduldig-Yatrofsky said.

Many questioned right-of-way acquisitions. Suffolk realtor Harry Cross asked when appraisals would be completed and discussions with property owners would begin.

Depending on the alignment, it “may take another year or so,” Rinehart answered.

While VDOT says it would look after residential and commercial property owners directly impacted, Stewart Tyler pointed out that business indirectly impacted — starved of custom because of the bypasses — wouldn’t receive support.

“We’ve spent $300 million and not a spoon of dirt has been turned,” Tyler said. “You could probably improve the existing 460 for $300 million. I think this is a boondoggle project; I think it’s something that got started and just didn’t get stopped in time.”

But the audience also sported project proponents, including Mayor Rita Richardson of Windsor.

“There’s a lot of information being put out that’s not exactly correct, and it’s swaying people’s views,” she said.

Money not spent on 460 will go to some other part of the state, like Northern Virginia, she said. And to hurricanes she added nuclear emergencies and military strikes by hostile enemies as potential evacuation triggers.

Evacuating along Route 58 during a hurricane would be likely to funnel motorists into the storm’s path, she said, and improving 460 would transfer traffic from Interstate 64 — frequently cited as more deserving of funding — to Southside.

“The most important thing is your life,” Richardson said. “If you die, nothing else maters.”

Fed up with detractors, one woman raised her voice and jabbed her finger. “People out here are dying,” she said.

There’s more and more traffic on the road, according to the woman, much of it trucks.

After Gov. Terry McAuliffe suspended contract spending on the project earlier this year, VDOT is taking another look at the environmental and other impacts of the project at the request of the U.S. Army Corps of Engineers.

The stop-work came after revelations that the previous preferred design has significantly greater wetlands impacts than originally believed, and the corps would likely not issue a permit.

Public hearings are expected in the fall, before a final supplemental environmental impact statement is approved.

VDOT expects the Federal Highway Administration and the U.S. Army Corps of Engineers will announce their preferred alternative by early 2015.