Clint Wright is putting together a blast from the area’s basketball past this Friday to help improve Lakeland High School’s future on the hardwood.

Each team will have former players and graduates representing their schools. 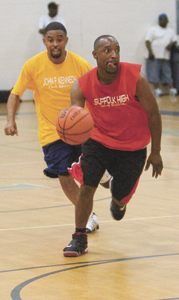 Wright stated in an email that the objective and purpose of the event “is to help raise funds for Lakeland High School boys’ basketball and to give the heralded Peanut District basketball participants an opportunity to showcase once-supreme basketball skills.”

As a John Yeates alum, Wright will play for that team, and he said he has six rosters of 15 players from each school.

Wright, the Lakeland boys’ basketball coach, invites everyone to come out, and the price of admission will be up to the individual.

“This is really a fundraiser for my basketball team, and we’re asking for donations,” he said. “We don’t have a fixed price.”

There will be concessions during the event.

Wright got the idea to hold the event from Michael “P-Bird” Britt.

To fill a hole in the playing schedule for his “Communities Coming Together” event last year, Britt asked some of the players from the old high school teams in the area to call their classmates on short notice and arrange some ‘old-school” exhibition games.

There was ready interest.

“We got it done in about 10 days,” Wright said, noting people figured it had been planned far in advance.

“We helped to make P-Bird’s community day a success,” Wright said. “It turned out to be a blast.”

While Britt focused on other teams to fill his schedule this year, Wright really wanted to keep Britt’s idea alive.

Notable participants will include Forest Glen alum Lamont Strothers, a former NBA player and Hall of Fame member at Christopher Newport University, where he is the all-time leading scorer, with 2,709 points. He is also in the USA South Conference Hall of Fame.

Also present on Friday will be Suffolk High School alum Tony Smith. He was an 11-year professional player overseas, and his 3,350 points scored at Pfeiffer University made him the all-time leading scorer in North Carolina throughout all three divisions of the National Association of Intercollegiate Athletics.

Wright said former cheerleaders are also encouraged to come out.

Teams will wear T-shirts with their school colors, and the event will have door prizes.

There will be a moment of silence before the 9 p.m. game in honor of Troy Joyner, a 1985 Forest Glen alum and basketball player who died a year ago this month.

Following is the schedule for the Peanut District Ol’ Skool Classic held on Friday at Lakeland High School: