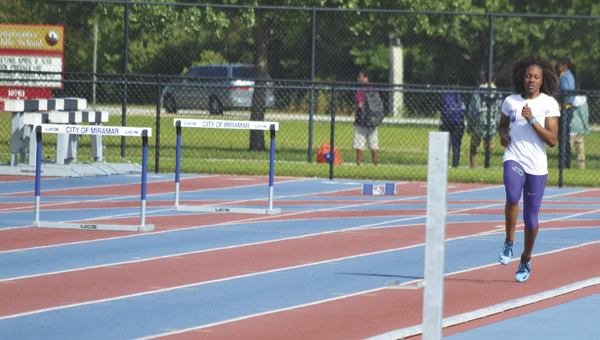 : Sixteen-year-old Brandeé Johnson of Suffolk earned her chance to represent the Americas in China this month after she shone this spring in the U.S. Area Youth Olympic Selection Trials in Florida. (Toy Redding photo)

She is traveling to Nanjing, China, to compete as part of the Americas Youth Olympic Team in the Second Summer Youth Olympic Games, which run Aug. 16-28.

The event is the culmination of a long period of largely continuous track and field training and competition for Johnson that extends back nearly a year. 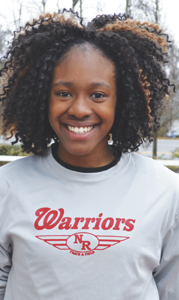 She said representing not only Suffolk, but the United States in the Youth Olympics “means a lot, because I know that I’ve accomplished a lot this season.”

Nansemond River coach Justin Byron said this is his first time directly coaching someone so young that is going so far abroad to compete. The plan had originally been for Byron and Brandeé’s mother, Aquilla Redding, to accompany her, but it did not prove to be possible.

“Yes, I have already started crying,” Redding stated in a text message earlier this month. “First time ever away from each other. I have only missed one of her track meets.”

Of course, he pointed out she will be well taken care of by officials with her other young team members, even more so than adult athletes like himself who competed internationally.

Given his experience, Byron was able to give some insights and advice to prepare Johnson.

There will be many variables over which she has no influence, so he said, “You’ve got to control the things that you can control.”

He recalled one small way he did this was by bringing with him a significant amount of Nissin Top Ramen Oodles of Noodles.

“I wanted at least one constant,” he said. “I didn’t know what food was going to be like.”

It was also important to be keenly aware that certain important phrases would be delivered in another language, like “On your mark,” and “Get set,” before the gun fires and races start.

“The gun is universal, but those first two are different,” Byron said. “It’s little things like that. You’ve got to stay poised.”

He said the last bit of general advice would be for her to embrace and enjoy the experience.

“This is an opportunity that most people don’t have, especially at her age,” he said. “All expenses paid to go to China and do something that you love, and you’ve got to go over there and have fun.”

Johnson will wear a USA uniform and represent the Americas in the 200-meter dash, as well as a unique relay event. She qualified to go to China based on her performance this spring at the U.S. Area Youth Olympic Selection Trials in Florida.

“I’m just ready to get out there and run,” she said.