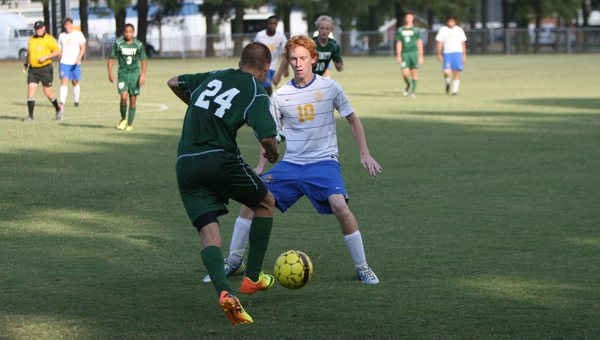 Junior Patrick Crossman will be one of the upperclassmen looked to specifically for leadership on this year’s Nansemond-Suffolk Academy boys’ soccer team.

The closest Nansemond-Suffolk Academy’s boys’ soccer team came to victory last year was a tied game, but coach Patrick Whelan said you would not know it by the spirit of this year’s squad, which features 13 returning players.

“Even though we didn’t win a game last year, the morale is still very high,” Whelan said. “The boys are very eager to improve this season. We’re not just going to get a win, but many wins is the goal.”

“They were captains on the field and off,” Whelan said of the trio. And while they are missed, he said players this year “are really eager to sort of pick up the mantle.”

The team captain this year is senior Cole Jackson, who will be the starting center fullback.

Whelan said he always has the team vote for who is its captain, and Jackson was nearly a unanimous choice, with his natural leadership abilities being obvious in addition to his soccer skills.

“Those three not only start just about every game, but they really leave it on the field,” Whelan said.

He said he and assistant coach Francisco Sanin are sort of spoiled for choice in the NSA program this year.

“Carrying a roster of 17, I look at every one of those 17 to play a pivotal role this season,” Whelan said, noting how nice it is to have a squad where every player is challenging for a starting position.

He also said he loved how his players were distributed in age, with six seniors, five juniors, four sophomores and two freshmen.

Experience is particularly great among the juniors, all of which Whelan said have been in the NSA soccer program since seventh or eighth grade. Those juniors include Patrick Crossman, Michael Hughes, Louie Joseph, Michael Luzzatto and David Richter.

Crossman and Joseph shone in a scrimmage against the visiting BEACH Breakers on Friday as each player scored.

Rounding out the Saints’ goal-scorers in the contest was sophomore Tanner Jackson, who Whelan said has “made tremendous strides since last season, and he’s going to be a huge player for us, whether it’s scoring goals or assisting.”

The Saints lost the scrimmage 4-3, but NSA’s coach said, “We showed how dangerous of a team we can be at times.”

Injured during the game was Nansemond-Suffolk’s new starting goalkeeper, sophomore Ryan Griffin, who played football last year but is an experienced goalie. Whelan hopes he will be healthy when the regular season starts.

Summing up his and Coach Sanin’s expectations for the 2014 Saints, Whelan said, “We think the sky is the limit with this team. We see no reason to set our expectations any lower than to win.”

He later added, “Right now, our sights are set on next Friday for our first game against Denbigh Baptist (Christian School). The focus on the team is palpable.”