Cavs get started, Saints aim for another win 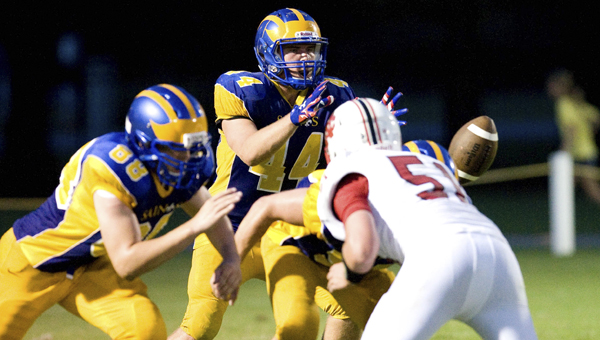 Nansemond-Suffolk Academy senior fullback David Gough takes the snap in the Wildcat formation during last week’s win. He will be back on the field tonight, having recovered from his minor ankle injury.

The Lakeland High School Cavaliers enter the 2014 season with a goal of turning the tables on I.C. Norcom High School after the season-opening blowout they suffered at the hands of the Greyhounds in 2013.

“We feel like we are in a better position than we were last year,” Cavaliers coach Bryan Potts said, highlighting a great offseason workout program that the players really bought into and two good scrimmages. “We’re entering the Norcom game on a high note. The kids are ready to move forward.”

The Greyhounds exhibited capability of a balanced attack from what Potts saw of their preseason scrimmage against Kecoughtan High School.

“They showed they can pass the ball, but I think they’re really going to come out and try to establish the run,” he said.

They have a clear option to go to in the form of senior running back Charles Wiggs.

“I think with our defensive backs that we have, I’m not necessarily worried about anybody who can pass,” Potts said. “But if we’re going to be successful, not only tomorrow night but this season, we’ve got to stop the run.”

When Lakeland has the ball, Potts expects a decent mix of passing and running, but said, “We’re going to focus on most taking what the defense gives us.”

The Cavs will be short two starters. Senior wideout/running back/free safety Ja’Juan Walker is recovering from a slight high ankle sprain, and senior offensive guard/defensive tackle Travis Jones has symptoms of a slight concussion. Both will likely be back next week.

The Nansemond-Suffolk Academy Saints are coming off a 66-32 season-opening win over visiting North Cross School that was dominated by penalties and cramps.

NSA can count itself fortunate to enter week two healthy, particularly with regard to senior David Gough, the Saints’ leading rusher the last two years, who left the game with an ankle injury.

“David Gough’s ankle was just a minor sprain, and he practiced yesterday, so we’ll be at full strength,” Nansemond-Suffolk coach Lew Johnston said.

Though the Saints routed the Wolves last year, Johnston cited a reason not to be overconfident this season.

“It’s a better team than we faced last year,” he said. “They seem to have more size.”

Johnston said the Wolves’ coach is a Single Wing Offense guru. The Single Wing is even older than the Wing T, which NSA uses, and it features no quarterback, per se. The Wing T grew out of the Single Wing formation.

“It’s interesting, we’re going to face a lot of things that teams have to face against us,” Johnston said, noting the Wolves will use a lot of motion, misdirection and deception, with several possible runners on each play.

Offensively, Johnston said, “We’ll pound it and use the three-headed monster again this week and see what we’ll create,” referring to NSA’s running game with Gough, senior Addison Peak and junior Noah Giles.