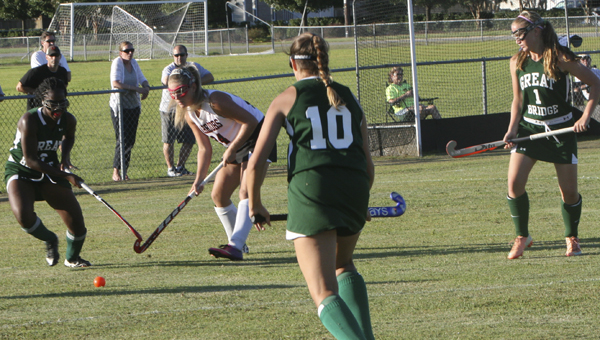 The predominant focus after the win, though, seemed to be on the Lady Warriors’ missed opportunities and their room for improvement.

“We’re just looking to play a great game, and I don’t think that was great yet,” she said.

Lady Warriors coach Ali Mowry made sure her players knew they needed to elevate their games.

“There’s no more bad teams in the Southeastern District, in the area,” she said. “It’s either you’re good or you’re great, and I need them to rise to the challenge, and I’ve challenged them with a tough schedule this year.”

Regarding Wednesday’s game, Mowry said the victory could have been by a much more comfortable margin.

“We had plenty of opportunities,” she said. “We still need to work on finishing and just getting hungry in the circle.”

The Lady Warriors got off to a reasonable start, going up 1-0 about 10 minutes into the game when freshman forward Ashlyn Rogers scored off an assist from senior forward/midfielder Desiree Patterson.

The Lady Wildcats responded about 10 minutes later. The 1-1 tie stood until Janek scored within the first 10 minutes of the second half, aided by sophomore back Mackenzie Roach’s assist.

Excited to get her first goal of the season, Janek said, “It was pretty awesome, especially since it was a winning goal.”

Mowry saw positive things from Rogers and sophomore backs Roach and Victoria Czuprynski, but really wants more from them, as well.

Monday’s game against rival Grassfield also featured what Mowry said was a good, not great performance from NR.

The Lady Warriors and host Lady Grizzlies finished regulation in a 2-2 tie and went scoreless in overtime, leading to penalty strokes.

“They scored one, we missed all five,” Mowry said.

She affirmed it was unusual to miss all five, but showed lenience since it was the first game of the season, allowing less time for extended practice on strokes.

Patterson scored both Nansemond River goals, one assisted by Janek and the other by junior midfielder/forward Ashley Hiltabrand.

“I definitely think we could have won,” Janek said. “We had a lot of opportunities. It sucks that it ended in strokes like that, but I think we definitely played as a team.”