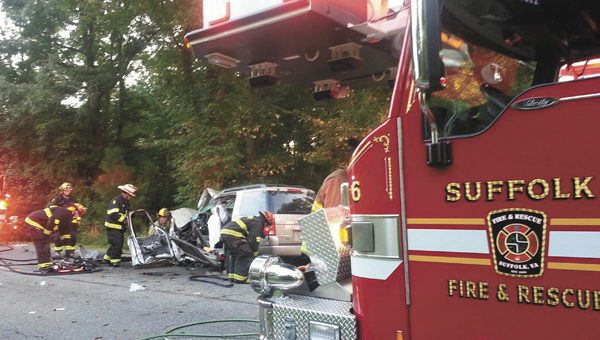 Suffolk firefighters work the scene of a crash on Monday morning on Godwin Boulevard. The driver and passenger from this Ford Explorer both were injured. (Courtesy City of Suffolk)

Two people were injured in an early-morning crash on Godwin Boulevard Monday.

The wreck happened at 6:28 a.m. The Ford Explorer ran off the road to the left and struck a tree, according to a city press release.

The male driver was entrapped and suffered injuries that are considered life-threatening. Personnel from Suffolk Fire and Rescue and volunteers from the Chuckatuck Volunteer Fire Department treated him on scene before transporting him to Sentara Obici Hospital, where he was airlifted by Nightingale to Sentara Norfolk General Hospital.

The passenger received assessment and treatment and was ground transported to Riverside Hospital for treatment of injuries not believed to be life-threatening.

The roadway was shut down in both directions for part of the morning while crews investigated and cleaned up.