A new place for Believers 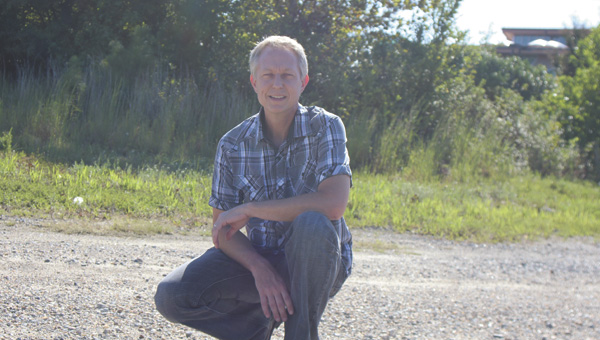 Senior Pastor Jamey Stuart crouches on the boundary of land in Harbour View where Believers Church, currently worshipping near Chesapeake Square, plans to build a new facility. At the back of Interstate 664, the Lockheed Martin building can be seen above Stuart’s left shoulder.

A church currently located near Chesapeake Square is moving ahead with plans to relocate to Harbour View.

Believers Church will build a new church on land it is purchasing near Interstate 664 off College Drive, said Heather Carl, its communications and outreach director.

“We have kind have outgrown the space at our current location,” Carl said. “We were looking at opportunities and possibilities on where to go, and we felt the Lord opened doors for us to be in that part of Suffolk.”

The new location, she said, is between the Lockheed Martin Center for Innovation and the hotels near the corner of Harbour View Boulevard and College Drive. The church expects to close on the land purchase within a week or two, Carl said, and has its current location in Chesapeake on the market.

The new location, she said, is in a diverse and expanding community while still being close to church members residing closer to the original location.

“I think its seven minutes door-to-door to where we are right now,” she said. “They don’t feel like we are leaving them high and dry — everybody’s really excited.”

Being next to the interstate, it also has good access to other parts of Hampton Roads, such as the Peninsula and Norfolk, according to Carl.

Believers wants to create a space that’s more open to the community, she said, adding, “We are super-excited about being able to be a community building.”

“Our plan is to make our building very accessible to our community. It will kind of be where we open our doors often — not just on Sunday for services — so we are excited about that.”

Plans for the building have yet to be drawn, according to Carl, but more kids’ space and parking are both high on the agenda.

“Certainly we are going to have an increase in our auditorium space, but the real driving factor is to create space for the kids,” she said.

“We have close to 450 kids every Sunday. We need a lot of space for all the children — it seems like whatever we do they fill it up.”

Meetings with the city, on zoning and usage agreements, “have gone really well,” Carl said.

The move has been planned for a couple of years, she said, adding that Believers likes to envision the future: “We are always trying to see what’s down the road next,” Carl said.