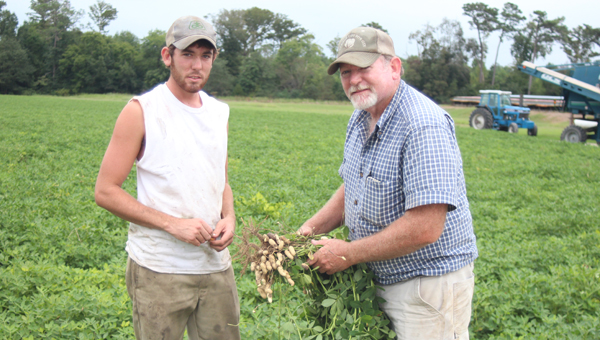 Hunter and David Bosselman inspect a peanut crop at their farm on Old Myrtle Road on Friday. A lot of rain on the vines has added disease pressure, David Bosselman said.

With harvest time for peanuts drawing close, one Suffolk farmer says it remains to be seen whether yields in Virginia turn out to be as strong as predicted.

“I’m not sure about that record yield. It remains to be seen,” Suffolk farmer David Bosselman said.

“We’ve got a good crop, but a lot of disease. And some vines are dead.”

Bosselman is set to harvest 365 acres of peanuts this year. He plans to pull some next week to see how far along they are. “My guess is the last week of September,” he said of when harvesting would begin.

Meanwhile, Bosselman’s 500 acres of soybeans have been affected by conditions either too hot and dry or too wet.

While he had “beans drowned out” on the heavier ground, he said, on the sandy soil, the root structure didn’t develop as well as hoped and plants suffered during dry periods.

“I’ve gone from one extreme to the other,” he said. “Yield loss from wet weather, and then we had dry weather.”

The state department puts soybean production in Virginia at 24.2 million bushels this year, up 8 percent from 2013.

Given the issues with wet and dry spells, Bosselman said he’s “not looking for a record yield” for the legume when it’s ready to be harvested next month.

Bosselman’s largest crop is cotton, with about 700 acres this year. Defoliation will start at the end of October or beginning on November, he said.

The statewide cotton yield is forecast at 190,000 bales, up 26 percent from last year.

Some farmers have already started harvesting corn around Suffolk. Bosselman said he will start on his 140 acres soon.

While the yield won’t be as good as last year, “I think it’s going to be a fair crop,” he said.

Low commodity prices are a bigger concern than fluctuating yields, according to Bosselman. “The price for fertilizer was higher when we put it out than now, and the price of commodities has gone down,” he said.

For instance, Bosselman said, corn has dropped from $4.50 or $5 a bushel at planting time to around $3.40 now, and the slide for cotton has been from 84 cents per pound in the early spring to 65 cents.

The price for soybeans has dropped off 18 percent since spring.