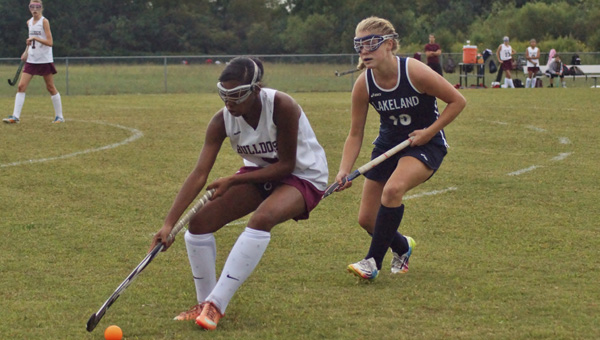 The world of Suffolk field hockey saw another major precedent fall this year at the conclusion of Lakeland High School’s game at King’s Fork High School on Monday.

In 2014, the Lady Cavaliers, long the dominant force in the city, have seen their 11-year Southeastern District win streak snapped, and they have fallen to cross-city rival Nansemond River High School for the first time since that streak began.

On Monday, a 2-0 final score accompanied the Lady Bulldogs’ first ever win against Lakeland.

She attended and graduated from Lakeland and played for field hockey while she was there, making the outcome of Monday’s contest strange for her.

“I won’t lie, it was a weird feeling at first,” she said. But knowing what the win meant for her team, she added, “I definitely embraced it.”

She said she did not know what to expect coming into the game but was prepared for a trip to overtime. All of the cross-city games had required one so far this year. Lakeland’s game against Nansemond River was decided in sudden death overtime, and King’s Fork’s contest against the Lady Warriors was decided by one point in strokes.

After the Lady Bulldogs won by two, Lady Cavs coach Cortney Parker said, “I expected more out of us offensively.”

She highlighted her team’s play on KF’s side of the field and in the midfield as being the focus of her disappointment.

“We did not play well at all,” she said, later describing the game as a minor setback in the team’s development.

Following some recent games, Van der Linden had been frustrated by her team’s inconsistency, but with its performance on Monday, she said, “I was happy.”

She pointed to King’s Fork’s speed and good decision-making as deciding factors in the game, as well as a shift away from its historically defensive mindset in games, where scoring goals was not the focus.

“We definitely played a more offensive game than we typically have,” Van der Linden said.

The Lady Bulldogs earned 11 penalty corners on offense, and junior Emma Marston scored off one of them, assisted by senior Randi Fiel, with 18:07 left in the first half.

“Lexus was just doing an amazing job defensively,” the coach said. “She just had another really great game.” She also created offensive opportunities for KF.

“While she didn’t score, she served as that vital bridge between the defense and the offense, and it made all the difference,” Van der Linden said.

Despite the loss, Coach Parker was pleased with sophomore Kaylene Thomas, who she said had a really good game as a left defender.