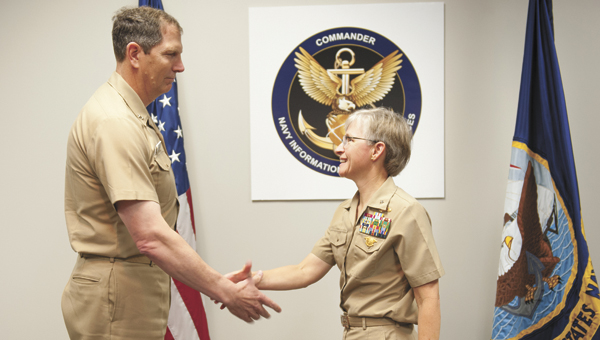 Rear Adm. Matthew J. Kohler took command of Navy Information Dominance Forces on Friday during a change of command ceremony at the Department of Defense’s complex in North Suffolk.

Kohler took the leadership role from departing Rear Adm. Diane E.H. Webber, who assumed command on Sept. 27, 2013, and is credited with overseeing the standup of the command headquarters in Suffolk, according to a Department of Defense press release.

“I can never say thank you enough for the wonderful work you’ve done here,” Webber told those assembled, according to the release. “It’s been an incredible year — a whirlwind year — and it’s mind-boggling to me when I think of all that you’ve accomplished in that short time.”

Webber received the Legion of Merit to recognize her achievements, including “developing and executing a comprehensive campaign plan to address Fleet Electronic Warfare shortfalls and reestablish electronic warfare as a primary warfare area,” the release stated.

“This command has been a home base for me, where I have circled back throughout my career,” she told her staff. “The people and the mission I have known here have been near and dear to my heart for over 20 years. I’m very happy to come home and finish my career here.”

The new command consolidates mission functions and tasks that had been managed by Navy Cyber Forces Command, Fleet Cyber Command, Naval Meteorology and Oceanography Command and the Office of Naval Intelligence.

During the ceremony, Kohler commented on the progression to NAVIDFOR since 2009.

“The NAVIDFOR culminates the deliberate evolution of Navy with respect to information dominance,” he said, adding that “the one piece that was missing over that period of time” was an information dominance type command. “And now we are here. We are here because of all the great work you and your team have done, and we will continue to build on your success.”

“I can’t be more excited than to be here today, to join the team, take a seat, grab an oar and continue to row,” he said.

A native of Erie, Pa., Kohler graduated from Indiana University of Pennsylvania in 1983 and was commissioned in 1984 through the Aviation Officer Candidate School in Pensacola, Fla.

He served most recently as Director of Intelligence for U.S. Africa Command.