In King’s Fork High School’s 55-19 football win at Great Bridge High School on Sept. 26, senior Tyler Brown was as prolific a scorer as some of the offensive players — only Brown scored his points at the linebacker position.

He earned the title of Duke Automotive-Suffolk News-Herald Player of the Week after leading an opportunistic Bulldogs defensive effort with a 10-yard interception return for a touchdown in the second quarter and an 80-yard fumble return for a score in the fourth. 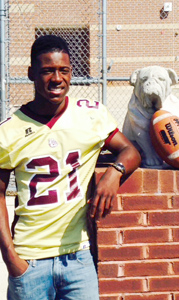 King’s Fork High School senior Tyler Brown has grown significantly as a football player in the last seven years and hopes to play in college. His defensive opportunism led to his title of Duke Automotive-Suffolk News-Herald Player of the Week.

Brown’s balanced response to his heroics demonstrated the kind of maturity all coaches hope to find in their seniors.

“I felt good,” Brown said, of his play. “At the same time, I kept a level head because I realized it was just one game.”

He said he was able to grab the interception because he remembered a coach’s advice.

“If you see the quarterback dropping back, just look for the outside receiver,” he said, repeating a coach’s instruction. “As soon as I saw the ball coming, I just jumped.”

Regarding the fumble return, Brown highlighted his friend and teammate senior linebacker D’Angelo Dillard, who forced the fumble.

“I saw (the ball) rolling on the ground, so I picked it up,” Brown said, and senior linebacker Duke Santora helped on the return by blocking for him.

Brown plans to run track again this year and play baseball, but football is his favorite sport because of its physical nature and the bond formed with teammates.

“My brothers on the football team, it’s amazing how all of us come together and just all produce as one unit,” he said. “I just love the brotherhood.”

His first reason for why football is his favorite is the initial contact that comes with it.

Contact was something he had to adapt to after not enjoying it when he first started his career as a 10-year-old with the Bennetts Creek Warriors.

His weight also caused him to be singled out.

“I used to get picked on a lot, because I was much bigger than other kids,” Brown said.

His size meant he had to play against older youths in Pop Warner, some as old as 14.

His father, Andrew Brown, was a standout receiver for John F. Kennedy High School in New York, N.Y., and the one that Tyler said inspired him to play football.

The elder Brown praised his son for not taking the jabs about his weight as a negative.

“He took it as a positive, just kind of turned it around,” Andrew Brown said.

Jones noted how Tyler Brown has worked out and slimmed down since playing for King’s Fork Middle School. He has moved from the defensive line to outside and middle linebacker, where he is now undersized but applies speed and football knowledge to make up for it.

Brown simply followed his father’s family policy: “We don’t quit. What you start, you finish.”