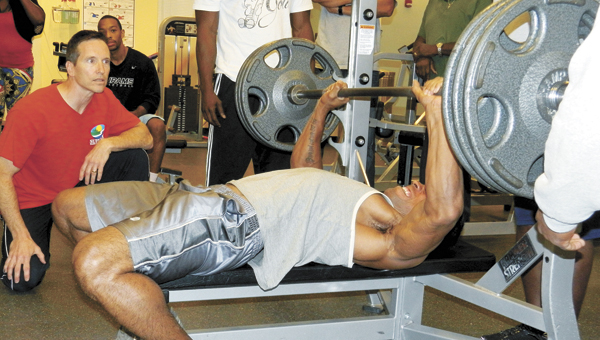 The diversity of interests that Suffolk’s residents have has helped sustain Suffolk Parks and Recreation’s annual men’s and women’s bench press competition, which takes place again this year on Oct. 17.

“Initially, back in 2009, it was to generate a little bit more interest for the East Suffolk Recreation Center’s fitness center,” said fitness specialist Mike Frickanisce, explaining the motivation for starting it.

The event will again be held there, but it is entering its fifth year for another reason, as well. Frickanisce said Suffolk Parks and Recreation simply wants to provide as many opportunities for physical activity as possible. But not everyone enjoys the same kind of activity.

“We’re just always trying to come up with different ways we can involve people in things they might enjoy,” he said, and while the bench press competition has not been wildly popular, it has fit the bill for a small group of people that Frickanisce hopes will grow.

The event featured eight men last year, and he said he has heard several regulars at the fitness center this year noting they have spread the word.

People usually register on the day of the event, but early registration is possible by contacting him.

Frickanisce emphasized there will be multiple weight classes.

“You just have to be able to win in your weight class,” he said.

Frickanisce hopes to see some new trends emerge at this year’s competition.

“I would really like to see some ladies show up,” he said. Noting strength training is actually very popular with women now, he added, “I think that it’s something that they would enjoy, if I could get a little bit more interest in it.”

“It would be nice to see some younger participants,” Frickanisce also said, highlighting the 16- to 18-year-old age range.

The event is free and open to the public for participants 16 and older. They simply need to show up in athletic attire at the East Suffolk Recreation Center, 138 S. Sixth St.

Weigh-ins will occur at 5 p.m., and the competition will start shortly thereafter. Each participant will get three lifts.

For more information on the bench press competition or to register, contact Mike Frickanisce at 514-4504 or mfrickanisce@suffolkva.us.