“It was the best they’ve blocked in several matches,” Lady Saints coach Robyn Ross said. “They had the highest hitting percentage that I think we’ve had all year.” 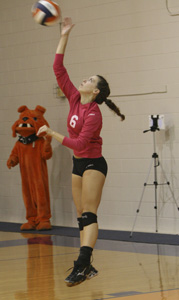 The team’s hitting percentage ascended to .493. The closest it had ever come to that before was in a previous match against Norfolk Academy, when it reached .337.

“To have your three main hitters putting points together like that is why last night went so well,” Ross said on Wednesday.

Her expectation is for her players’ hitting efficiency to be around .300.

“Every single one of our players, including (senior setter) Brooks (Gillerlain), hit above a .400 last night,” Ross said.

Fowler had 12 kills and four blocks, Harris registered 11 kills and three blocks and Gillerlain had 36 assists.

“Lindsay Knierbein served 33 times and we scored 28 out of those 33 times, and she had nine aces, so they couldn’t do a whole lot when she was back there,” Ross said.

Knierbein, a sophomore outside hitter, also led the defense with 10 digs.

Nansemond-Suffolk (14-7, 6-0) visits Cape Henry Collegiate School this evening for one of its tougher matches of the season.