Five minutes from Booker T. Washington Elementary School, scientists at the BASF plant on Wilroy Road use the knowledge and skills they gained in school to create the chemicals we rely upon each day. 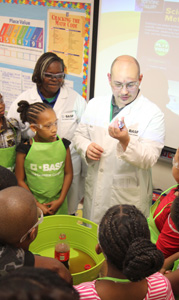 On Friday, two BASF employees returned to the classroom to show students at Booker T. a couple of the tricks of the trade, revealing the power of chemistry and confirming the importance of education in the process.

Chemist Nate Griggs and administrative assistant Joyce Riddick visited Teresa Abdulbaaqee’s fifth-grade classroom with two experiments, one demonstrating chromatography, a technique used in the lab to separate the components of a mixture, and the second turning a bottle of soda into a volcano using candy.

In fact, both experiments utilized candy, linking the BASF Kids’ Lab program to National Science Week, Oct. 19 to 26, whose theme this year is The Sweet Side of Candy.

Each student started with a small handful of M&M’s and Skittles, a coffee filter, a plastic cup with an inch of water, a dropper, a popsicle stick and a disposable bowl.

Griggs instructed them to place droplets of water on the candy to dissolve the color.

The color-infused water was then dabbed onto a strip of the filter, and the filter then dangled off the popsicle stick, the end of the paper dipping into the water.

What happened next was the essence of chromatography: as the water spread up the paper, the color went with it.

“There is really a shortage of scientists in the world, and we need you all to become the future scientists,” Griggs said.

Abdulbaaqee said the lessons meshed with what she’s been teaching her fifth-graders recently: scientific method and the scientific investigative process.

“We have been talking about doing investigations, and what that whole process means and the various steps of that process,” she said. “During our daily science reviews, we are focusing on solids, liquids and gases.”

Concepts are introduced Monday, Abdulbaaqee said, then discussed throughout the week until “scientific investigation day” on Fridays.

“Throughout the week we build students’ knowledge, and provide hands-on activities on the Friday,” she said. “The students look forward to this.”

With the second experiment, students crowded around as Griggs as dropped Mentos into a bottle of Coke. A volcano of soda erupted.

Abdulbaaqee said the visit by a local chemist “makes it real for them.”

“It helps them to envision themselves as scientists and engineers,” she said.