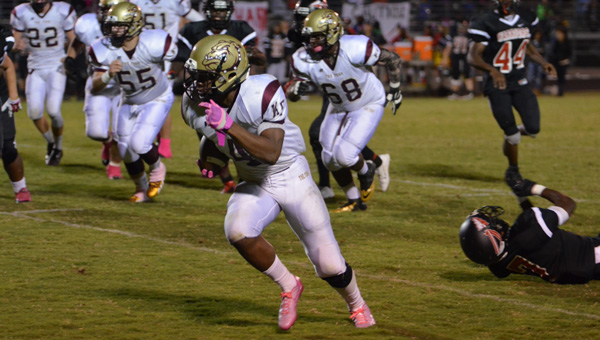 Friday night’s clash between King’s Fork High School and host Nansemond River High School looked like it might be close during the second quarter, but the Bulldogs’ ability to respond turned the game into a 47-20 blowout win for the cross-city visitors.

“I like how we’ve been responding to things,” KF coach Joe Jones said.

The Bulldogs could not do much on their next possession but got the ball back early in the second quarter when the Warriors punted to them. King’s Fork fumbled on the return, however, and suddenly Nansemond River had the ball on the Bulldogs 20-yard line.

“They got the momentum with the fumbled punt and scoring on the first play,” Jones said. “That was a big momentum play for them.”

But King’s Fork only took 14 seconds to respond. Senior TyQuan Weston returned the ensuing kickoff 85 yards for a touchdown, restoring the Bulldogs’ lead, 13-7. But they didn’t stop there.

“I was proud of our kids and how they responded when they tied it,” Jones said.

The hits kept coming for the Warriors. On their next drive, Bulldogs senior defensive back Kane Miskel caught a ball that had been tipped in the air and returned it 44 yards for a touchdown.

“We hadn’t had a special team or defensive touchdown since Great Bridge (High School), so we had one of each tonight, which was good,” Jones said.

Jones noted his team did a better job of shutting the Warriors’ offense down as the game went on.

After being set up by a 46-yard pass from Kluck to Little, Wethington made the halftime score 33-13 with a one-yard scoring run.

“Coming out the second half like we did, that was really big, because were able to jump on them quick and get a couple more scores, and that kind of put it away,” Jones said.

Wethington scored on another one-yard touchdown run less than three minutes into the third quarter after being set up by a small 19-yard Warriors punt from their own end zone.

King’s Fork set itself up for another easy score a few minutes later when it blocked a Nansemond River punt and recovered it at the Warriors 15.

Senior slotback Trelen Cox scored on a 14-yard run to help make it 47-13 King’s Fork with 6:01 left in the third quarter.

Wethington finished the game with 17 carries for 132 yards and three touchdowns.

DeShon Saunders went 4-for-12 passing for 138 yards, one touchdown and two interceptions, as junior defensive back Trashaun Delk snagged a pick.

The Warriors played were without star junior running back Terrence Lambert. Jonas Jones filled in, carrying the ball nine times for 116 yards and a touchdown. Senior running back Jalil Williams scored Nansemond River’s final touchdown on a two-yard run.

Jones gave praise to the Warriors and their development this season.

“In watching and preparing, they’re a team that’s improving very week, and I knew they were going to be fired up,” he said.

“It feels good,” Jones said. “It’s something that means a lot to us and our football program as I think it does to the other two schools. It just adds to the, I guess, intensity and hype of the game when we play each other.”

Responding well seemed to be the key to the victory for King’s Fork on Friday, but Jones said it has been the key for two straight wins now.

“I’ve been pleased with how the guys have responded since the Indian River (High School) game,” he said, alluding to the Bulldogs’ only 2014 loss. “We’ve been much more focused the last two weeks.”