Sarah Higinbotham’s story of how she came to be a verbally-committed student-athlete at the Division I level is slightly unconventional but happily true. She and Longwood University are the significant characters in the story.

The Nansemond-Suffolk Academy senior started playing lacrosse in seventh grade and has stuck with it consistently since ninth grade, stoking a desire to continue playing the sport in college. 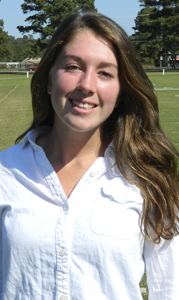 “It always had been a goal,” she said, but as her senior year got closer and closer, she did not think it was going to happen.

While many Division I-caliber student-athletes are going on a myriad of college visits, sending out many emails and ensuring that numerous coaches have their game film, Higinbotham had not been involved in all of that. She had sent a couple of emails in the past that got nominal responses.

But she did make a significant move in early September with relation to the Longwood University Lady Lancers that proved to be all that was necessary to open a door to the college level.

“I went to their camp in the fall,” Higinbotham said, noting the event included a variety of opportunities for participants to show their athleticism and skills for Longwood coaches.

She made an impression.

“This was the first time that a coach had emailed me back, and we got connected,” she said.

Her verbal commitment to play for and attend Longwood followed on Oct. 15.

“It’s amazing,” she said, describing what it meant to have this opportunity with a Division I program. She recalled all times she got up early but did not feel like it and all the times she went to practice but did not want to. “It pays off.”

NSA’s 2014 girls’ lacrosse coach Mary Flowers has moved away to Nashville, Tenn., but she has kept updated on Higinbotham’s status and was thrilled by the news of her decision.

“I’m extremely happy for her, and I think it’s a great move,” Flowers said. “If I had to choose a program that I thought would be a great fit for Sarah, I’d choose Longwood.”

Flowers remembered what the Lady Lancers were like when she played against them as a member of the team at the University of Richmond.

“They were tough girls, and they fought to the end, and that’s what Sarah does,” Flowers said.

Confident about what Longwood saw in Higinbotham, she said, “Her athletic ability, bar none.”

Flowers, who currently plays on a team sponsored by STX, has a lot of friends that are Division I coaches at the college level, and she said they have been clear about what they look for in prospective players.

“You recruit athletes and you mold them into the lacrosse player that you want them to be,” she said they told her.

Higinbotham, who is in her fourth year with the SOVA Swell lacrosse travel team, also applies her athleticism to field hockey and basketball but said lacrosse has become her favorite, calling it a mixture of the other two.

“It has the field of field hockey, but you have the skills and showmanship of basketball,” she said.

She plans to major in either occupational therapy or physical therapy at Longwood.