How fitness found me 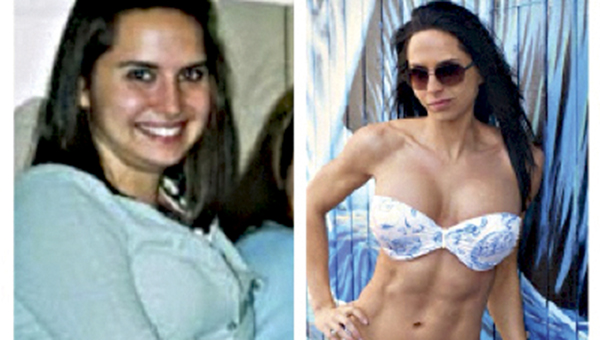 Erin Kosanovich in “before” and “after” poses during her weight-loss journey. She lost more than 70 pounds and stopped smoking after realizing how much damage she was doing to her body with cigarettes and fast food.

My venture into the world of fitness and bikini competitions began about five years ago. It has been a long hard journey for me.

I weighed almost 200 pounds back then. I refused to exercise. I smoked more than a pack a day and had to take medications to even be able to think right and then more to try to sleep. I would eat at least two meals a day from whatever fast-food place I fancied at the moment. I slept three hours a night.

I had convinced myself I liked living this way, but I was really creating a buffer for myself to avoid my true feelings about how I felt and looked. My husband has always been big into health and fitness. Through living my unhealthy lifestyle, I was tearing apart my relationship.

I was constantly sick and had a very unhealthy self image.

After a bout of depression, my doctor had me complete a health assessment online. The assessment told me that at 23 my physical age was over 46. It also stated that I would most likely die of heart disease and had a major risk of developing cancer.

It scared me enough to realize a change needed to be made. I had done a lot of damage to my body with poor diet and smoking. I was tired of being literally “sick and tired” all the time.

I will never forget the look on my husband’s face when I ran out of the bedroom after completing the assignment and began throwing all the bad food away. I explained what I had learned about my health, and he happily pitched right in.

The next day, I began a steady regimen of cardiovascular exercises and weightlifting. I adopted the outlook of “focus on getting healthy, the weight will take care of itself.” Through following a clean diet plan, supplementation and learning to live a healthy lifestyle, I was able to lose more than 70 pounds and began to look into competing in fitness competitions.

I would buy Oxygen Magazine and look at all of the competitors in the back and say, “Man, I wish I could do that” and “Yeah, I could never train like that.” Even along the way, I was my own worst enemy.

Then a friend called one day after watching a competition in Virginia Beach. She was yelling through the phone, “You have to do it! You can so do this.” That was the push I needed to finally gather the courage to prepare for my first Bikini Fitness competition.

Three years later, I have competed in multiple competitions across the region. I have obtained my IFPA Natural Bodybuilding Pro card and my NPC national qualification, and I have begun to train to step on an NPC national stage.

I hope to take this as far as possible, with a career in fitness modeling and competing in bikini competitions across the nation. I hope to help others achieve their goals through writing and eventually training and coaching.

I hope to utilize my experience and knowledge to show people the importance of believing and committing to the process to accomplish their own goals.

Physical fitness is not just about working out and eating well. It is about finding that balance in your life. The best advice is to love yourself for who you are and bring the best YOU to the game of life.

Never shy away from chasing your dreams. I never would have thought back then that I would be who I am today. Believe you can, and achieve you will.

Erin Kosanovich began her fitness journey in 2011. Having lost more than 70 pounds through proper diet, exercise, and consistency, Erin now competes on stages nationwide with the National Physique Committee.