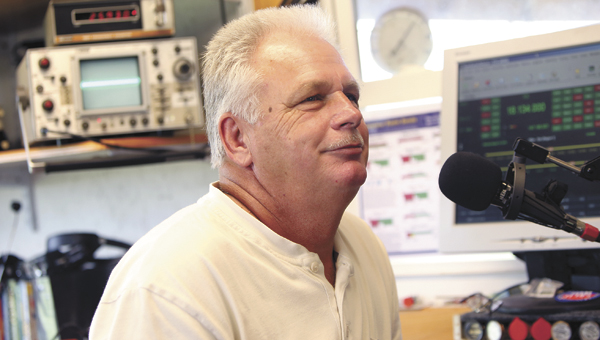 Buck Johnson listens from his “ham shack” to a ham radio operator in Italy, who describes Johnson’s Suffolk signal as “5-9.”

You can’t see them, but they’re all around you.

Nobody knows that better than hams, who mostly use the unseen radio waves for fun but who can also become the lifeline for communities that have lost the normal modes of communication in times of distress.

KK4BJZ, otherwise known as Buck Johnson, is one of 156 licensed amateur radio operators in Suffolk. Every ham has his “thing” in the hobby. Johnson’s is building equipment and, of course, talking.

“I like building antennas,” he said. “I like talking to people all over the world. There’s all kinds of people.” 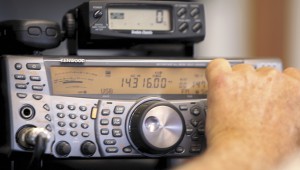 Buck Johnson turns the knob on his ham radio equipment, looking for a contact in another country. He eventually got one from Italy.

Johnson turns a dial in his “ham shack,” a small addition to the garage in his rural backyard constructed for the sole purpose of housing his radio equipment. The dial turns a large antenna on top of the building. A display beside the dial gives the names of nearby communities — Isle of Wight, Driver, Portsmouth, Ahoskie, Southampton — to let him know which way the antenna is facing.

Once the antenna is facing east, Johnson picks up a man speaking English with an accent.

“Kilo-Kilo-4-Bravo-Juliet-Zulu,” Johnson says, stepping on a foot pedal and speaking into the radio.

The two make contact and exchange small-talk details. Johnson glances at a window where an outdoor thermometer is mounted, gives details on the weather in Virginia and listens to the man’s reply. He tells the man he lives in Virginia, on the east coast, and learns the man lives in Italy.

That’s usually about all the conversation that is possible when one of the parties is speaking a second language. But it’s not just about the conversation, Johnson says.

“It’s more about the contact,” he said. Most hams keep track of which countries they have made contacts in, striving for the golden number — 330. Sometimes contests are held.

“It’s not for money or anything like that; it’s for bragging rights,” Johnson says.

Most any country, no matter how small or impoverished, has at least a few hams, Johnson says. There’s only one country that sticks out for its lack of communication on the radio — North Korea. 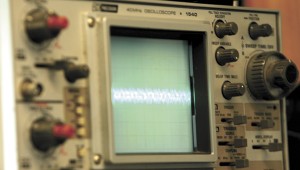 “Unless you talk to the real old-timers,” most people have never contacted North Korea, Johnson said.

The other point of pride for hams is how they sound to others. That lets the other hams know how good their equipment is.

The man from Italy rates Johnson a “5-9” — that is, 5 for voice quality and 9 for signal strength, the highest possible ratings. He tells Johnson there was a “pileup” — in other words, multiple people were trying to contact him.

“Because I was the loudest, I’m the one he answered,” Johnson says.

Despite all the fun of making contacts in other countries, hams really get to shine in times of emergency. Ham radio needs only a 12-volt battery — found in any vehicle — a wire and a transceiver to operate. It’s the only form of communication that cannot be downed by severe disasters, whether natural or man-made.

During Isabel and Irene, there were certain points at which ham radio was the only form of communication from Western Tidewater to Richmond. It can send data files, emails and even photos.

But it’s all about the fun — and the next generation — for Johnson.

“When this gets in your blood, you’re spending more money than your wife wants you to spend and staying up all night,” he said. “I’m hoping to pass this on to my granddaughter. She’s 5. I’ve enjoyed it, and I hope it continues on.”

Peanut dust, country music, the smell of funnel cakes, the roar of motorcycle engines and the crispness of new autumn... read more