Chuckatuck native Trooper Nathan-Michael W. Smith on Monday died in the line of duty with the Virginia State Police.

Smith crashed his Ford Taurus patrol vehicle in Prince George County while responding to what he believed was a trooper in distress at another crash scene, according to a Virginia State Police news release. 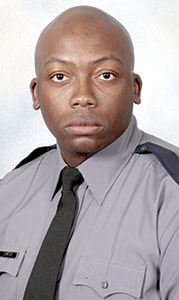 Smith is 27 and had been serving with the Virginia State Police since June 2014. He was a 2005 graduate of Nansemond River High School and was married with two children.

Virginia State Police responded to a single-vehicle crash on Route 460 in Dinwiddie County at 7:11 a.m. Monday, according to the news release. A Dodge Ram 1500 pickup truck ran off the right side of the road and struck the guardrail.

One of the troopers at the crash scene radioed the state police Richmond Division dispatch to request emergency assistance. When other troopers in the area heard the request over the radio, they understood it to mean there was a trooper in distress, according to the news release.

Smith was one of several who began making their way toward the scene. He crashed his patrol vehicle about 7:20 a.m. on the Interstate 295 south exit ramp to Interstate 95 north in Prince George County. The vehicle ran off the left side of the ramp and crashed into the wood line. He died later in the morning at VCU Medical Center, where he had been taken by helicopter.

It was later determined no troopers were in distress at the original crash scene on Route 460, according to the release.

Smith told the News-Herald last year that he has always wanted to be in law enforcement.

“As a kid, I would memorize license plates and identify cars,” he said. “I’ve always been interested in helping and serving the public in any way that I can.”

He chose the state police because it is a prestigious organization, he said.

“If you’re going to be in law enforcement, why not do it for the state, because that’s the best agency you can be with,” he said.

Smith is the 61st sworn employee of the Virginia State Police to die in the line of duty.

Contributions to help Smith’s family can be made to the Virginia State Police Association Emergency Relief Fund. Checks can be made payable to the VSPA-ERF with “Smith” in the memo line of the check. Mail checks to VSPA, 6944 Forest Hill Ave., Richmond, VA 23225.

Online contributions are also available through PayPal. Visit www.vspa.org and click on Emergency Relief Fund. It is important to put “Smith” in the note section of your PayPal contribution.