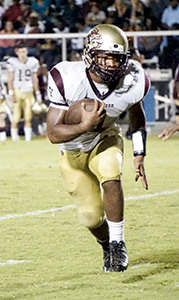 King’s Fork High School senior feature back Deshaun Wethington has verbally committed to play football for Towson University on a full athletic scholarship. He first gave the honor to God for the achievement, noting, “Without Him, none of it is possible,” then thanked his family, coaching staff and teammates for their support. (Danny Haymond/Fine Focus Photography)

Senior feature back Deshaun Wethington verbally committed to play NCAA Division I football for Towson University this past week.

“You can ask any athlete — the recruiting process actually is a nagging process,” Wethington said. “It’s something else to worry about on top of school and football, so I’m glad to get that out of the way so I can just work towards Towson now. It’s just a great feeling knowing that I’ll go to school on a full ride.”

He noted Towson has expressed interest in him since the middle of last season, and the two parties have been building a good relationship since then.

“They officially handed out the full offer the beginning of this season,” Wethington said.

He added that about two weeks ago, he visited Towson with his parents, and both he and they loved it.

But Wethington opted for Towson over other schools for both academic and athletic reasons.

“At any school, you get tutoring and stuff, but (at Towson) they stay on top of the students, especially the freshmen, and I feel like that’s something that I need, to keep someone on top of me and to keep me doing the right things,” he said

“And on the football side of things, they run the football quite a bit,” he continued. “They run I-formation — that’s probably my favorite formation. Their last three running backs were All-Americans; two of them went to the (National Football) League.”

One of those pro backs is Terrance West, now in his second season in the NFL and currently playing for the Tennessee Titans.

King’s Fork coach Joe Jones noted he is happy for Wethington and expects him to be a great fit with the Tigers.

“They rely heavy on their tailback, and that’s perfect for him,” Jones said. “He was their No. 1 running back on their board, and he’ll go in and compete, and they’ll have a returning senior in front of him, and he’ll learn from him and I think have a great opportunity to play there.”

Wethington said he expects to play as a freshman, and once junior running back Darius Victor graduates, the starting spot will be up for grabs.

“If I get the spot, I’m going to do what I have to do to keep it,” Wethington said.

He is not sure yet what he wants to major in, but he is applying himself to his work right now in the classroom, and Jones noted he has improved his grades a lot.

“He’s matured a lot since last year,” Jones said. “He knows what the future holds now and what he has to do, so I’m excited for him.” 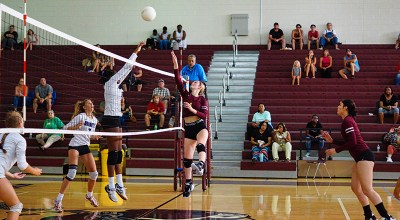