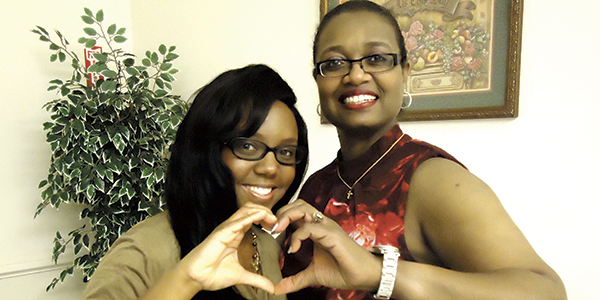 Theirs is a journey from near-death for one and misdiagnosis for another to the possibility of long life for both.

Bunny Chavers first got sick when she was 16, the day after playing in a softball game at Forest Glen High School.

“The next morning, I could not get out bed,” she said. “I remember it being an early spring morning, and it was a little chilly. The joints in my knees, hands and throughout my entire body were swollen and in a pain that was certainly not from the regular soreness of playing softball. When I finally rolled myself out of bed and struggled to the bathroom mirror, I saw an unrecognizable face, but it was indeed mine. It had a strange rash that I didn’t understand, and it felt warm to my fingers.”

Chavers was diagnosed with systemic lupus erythematosus, an incurable autoimmune disease that causes the immune system to attack healthy tissues in the body.

Females comprise 90 percent of the diagnosed cases of lupus, according to the National Institutes of Health. Black women get the disease three times more than white women for reasons that are unknown in the medical community.

Chavers’ chronic disease was managed by medications until she was in her 30s, when the physical demands of pregnancy and childbirth further compromised her immune system.

Her kidneys deteriorated rapidly, and many therapies were used in an attempt to manage her lupus. Through chemotherapy, doctors tried to shock the kidneys into halting their deterioration. Her lungs were tapped four times to release quarts of fluid. The blood vessels in her legs were inflamed, and she had fluid around her heart.

By age 41, 25 years after her first lupus symptoms, her kidneys had failed, and with no live or deceased donor available, her primary option was to begin hemodialysis. Her name was added to the kidney transplant list and the waiting began for a kidney that matched her body tissues. It can take from five to eight years to receive a cadaver kidney.

According to the National Kidney Foundation, Bunny was one of more than 200,000 African-Americans with kidney failure.

Kara Wiggins, Chavers’ younger sister, also was diagnosed with lupus in 2002 at age 21.

Like her sister, she gave birth to a child in 2008. Although pregnancy did not exacerbate her lupus, her blood pressure needed to be controlled with medications.

Thirteen years later, in May of this year, Wiggins got severely ill with what doctors initially thought was a lupus episode. She lost 30 pounds over a two-month period. Following her weight loss, she received a complete medical exam — more thorough than she had ever received. Doctors determined she had been misdiagnosed; she did not have lupus, but an infection curable with antibiotics. Now at age 35, she was off blood pressure medicine and healthier than she had been for more than 14 years.

“I experienced a quiet and intense moment of clarity. ‘I’ll get tested to see if my kidney will match Bunny’s,’” she recalled thinking.

Secretly, she contacted the Transplant Division of Sentara Norfolk General Hospital to determine if she could become a donor for her sister. She expected to wait four weeks for the results of blood and tissue tests. One week passed. Her phone rang with exciting news from the live donor coordinator: “You’re a match.”

“I was speechless at first. Then, all I could hear was myself screaming and crying,” Wiggins said. “I called Bunny. She was having dialysis at the time.”

“I didn’t even know she had been tested,” Chavers said. “When she said the words, I instinctively said, ‘No!’ And then I screamed, ‘My sister is a match!’ Everyone in the dialysis room screamed with excitement.”

Since then, the two sisters have had psychological tests, discussing the pros and cons of kidney donation, and they had extensive lab tests, including a CT scan, an EKG and visiting a kidney specialist for clearance.

Their journey shows that this disease can and does happen to anyone. Both sisters are health professionals. A registered nurse since 1993, Chavers works in the Interventional Radiology Department of Sentara Obici Hospital. Wiggins is a pharmacy technician for Virginia Oncology Associates in Norfolk.

Chavers has received emotional and financial assistance for transplant costs from the American Kidney Fund. The fund provides grants and education to kidney patients

According to its 2014 annual report, the group provided financial assistance to 20 percent of the nation’s dialysis patients. Its grants enabled more than 84,000 people in all 50 states to maintain their health insurance coverage and afford other critical expenses related to obtaining life-sustaining dialysis treatment.

Chavers will be required to take post-operative medicines for the remainder of her life. Her out-of-pocket expenses for medicines to prevent rejection of the organ are expected to be between $3,000 and $5,000 per month.

A GoFundMe page to help Chavers has been established at www.gofundme.com/teambunnyhope.

Chavers has the nickname “Bunny” because she was born on Good Friday — the season of resurrection and of new life. She has already proven she can live with dignity and without defeat.

“My sacrifice has been four hours, three times each week for the past three and a half years,” Chavers said. “You can still work; perhaps not full-time. It has simply been a lifestyle change.”

On Tuesday at Sentara Norfolk General Hospital, her sister’s kidney will add hope to her dignity.

‘Distraction can be deadly’