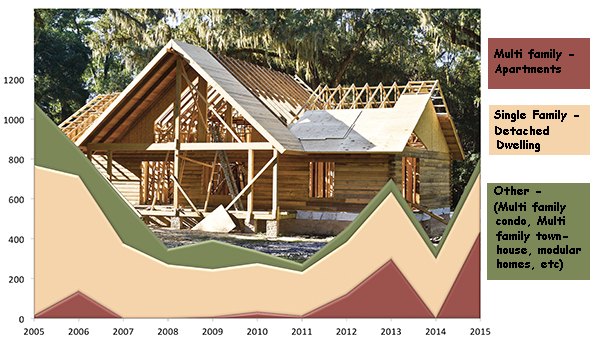 Suffolk’s housing market continues to gradually recover from the recession, from 2007 and 2009. The uptick of defense contractors, retailers and medical offices has brought a greater demand for apartments, particularly in North Suffolk, according to local Realtors.

“Rentals are hard to come by these days,” said Realtor Grace Brown of Rose and Womble Realty. “For years, there has been a desperate need for apartments in Suffolk. “Even now, finding an affordable apartment is tough.”

In 2015, the city issued 436 building permits for apartment units, the most issued annually in at least a decade, according to city records. That total was also nearly 50 percent higher than the number issued in 2013.

Apartment growth is also outpacing that of single-family homes in Suffolk. In 2015, there were 303 permits issued for single-family home construction, well below half the total of 754 issued in 2005, at the height of the housing bubble. Conversely, during 2005 the city issued only 13 building permits for apartment units.

“Overall, the market is not back to where it was before,” said Branch Lawson, president of East West Communities of Hampton Roads, the developer of The Riverfront at Harbor View. “It’s probably at a healthier point, without so much speculative buying.”

Apartment and other multi-family residential communities are an especially hot commodity in the explosive North Suffolk market.

Terry Peterson Co., the master developer for the 148-acre mixed-use development Hampton Roads Crossing, is building 290 single-family homes — a mix of condominiums and detached homes — in a development called The Residences at Hampton Roads Crossing in the University Boulevard area, said John Peterson III, the company’s senior vice president. Approximately 100 have been sold, he added.

Within about two years, the company plans to build another 266 residential units on the other side of University Boulevard, Peterson said.

Nearby, on Harbour View Boulevard, Kotarides Development Co. is building roads and other infrastructure for Claremont at Harborview Station, a 276-unit luxury apartment complex.

“Apartments have become a hot commodity,” said Lawson. “A lot of millennials who saw the scorcher of 2008 got scared. They are putting off buying, even though mortgage rates are so low it’s almost as cheap to own as pay rent.

“This is a generation who would rather rent than buy, for whatever their individual reasons may be.”

The demand for rentals is also growing to shelter the number of people who were underwater with their homes after the housing bubble burst and their home values abruptly tanked, according to several local realtors. Rather than walking away or having banks foreclose on their properties, many opted to lease their homes and rent more affordable housing for themselves, said Century 21 Realtor Terry Fraley.

That’s particularly true for the military, whose security clearances are impacted by credit scores, he added.

Lenders also have tightened up their restrictions, making loans more difficult to get, said Brown.

“Tighter loans have forced people who would have been buyers during the boom to become renters,” she said.

Although the Hampton Roads housing market still has a too-thin inventory of homes for sale, the tide has shifted, said Suffolk Realtor Lee Cross. Property values are beginning to climb slowly, and houses are beginning to sell a little faster, he said.

“We aren’t even close as far as property values, but we are up a little more than last year. It gets a little better each year,” said Chorey and Associates Realtor Billy Chorey. “People are wanting to sell … and it’s a buyer’s market in the old part of the city. The supply is much greater than demand.

“So far as resales, if a property is priced and and marketed properly, it will sell,” Chorey said.

Brown says she believes there is dire need for affordable, low-income apartments in the core of downtown Suffolk. She is optimistic that plans are in the works for at least one new complex for that area.

As ever, real estate tides and trends will continue to shift.

In a few years, Peterson said, there will be a surge in demand for new single-family detached homes as millennials move out of apartments and other multi-family homes, start their households and raise their own families.