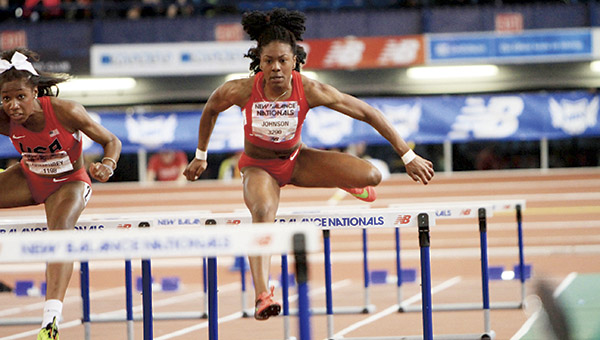 The Lady Warriors took that reality to a new level over the weekend, producing their best performance yet on the national stage during the New Balance Nationals Indoor meet at The Armory Track & Field Center in New York City. 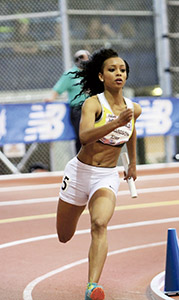 Nansemond River High School junior Syaira Richardson runs during the preliminary heat of the girls’ 4×200-meter relay at the New Balance Nationals Indoor meet in New York City over the weekend. She ran an outstanding anchor leg in the final to help bring her team the national championship in the event. (Mary Ann Magnant/MileSplit.com)

The girls’ 4×200-meter relay team from Nansemond River won a national title, and the school produced several other high finishers.

“This is by far our best national meet,” NR track and field coach Justin Byron said.

He brought 19 girls to the meet and said that so many of them did well that it made the meet feel more like a state meet, which the Lady Warriors have made a habit of dominating the past few years.

Byron said strangers were asking how big Nansemond River is, if it is private school or a club and if all the girls really go to the same school.

Some of the Lady Warriors were even signing autographs.

The team had also set a new state record in the preliminary heat when it produced a time of 1:37.73, a time which broke the state record — 1:38.67 — they had set the first weekend of February at the Armory Track Invitational in New York.

“They broke the state record every time they ran together this year,” Byron said. “Three runs, three state records.”

The girls’ only disappointment over the weekend was that they did not get to run against the team that beat them at the Armory Track Invitational — Paul Robeson High School for Business and Technology out of Brooklyn, N.Y. The team was disqualified for an error committed during prelims.

Johnson ran the first leg of the 4×200 for Nansemond River, fresh off a tough run in the girls’ 200-meter run in which she produced the fastest time she has run at indoor nationals but still did not make the finals.

Johnson put the Lady Warriors in a significant lead, Towe helped her team hold it in the next leg, then Carter extended it, running a very strong leg for a freshman.

“She was the one who everyone asked about after the race,” Byron said.

Richardson finished the event with what her coach called a brilliant anchor leg.

“I was very nervous actually because it was the last leg,” Richardson said. “I knew also we were in position to win, so it was very nerve-wracking for me.”

She said that as she reached the finish line, knowing the team had claimed the title, “I was just really excited, and I just couldn’t stop smiling. The first thing I did was find my teammates, and we just starting hugging each other.”

In what Byron said was the fastest girls’ 60-meter hurdles race in high school history, Johnson finished in fifth with a time of 8.23. Runners were also being measured on how quickly they completed the first 55 meters of the race.

Nansemond River took fourth in the girls’ shuttle hurdles, an event in which a team of four girls runs the 55-meter hurdles one after the other.

Byron said the girls did not want to believe that they could run the race without Johnson, but they did it.

“I really wanted those four young women to get the opportunity to embrace their hard work and to earn their all-American status on their own,” Byron said.

Athletes and relay teams placing in the top six of the championship division were awarded All-American status.

Back in a big way

The Lady Knights seemed to be making up for lost time on Friday. The Suffolk Christian Academy softball team did... read more