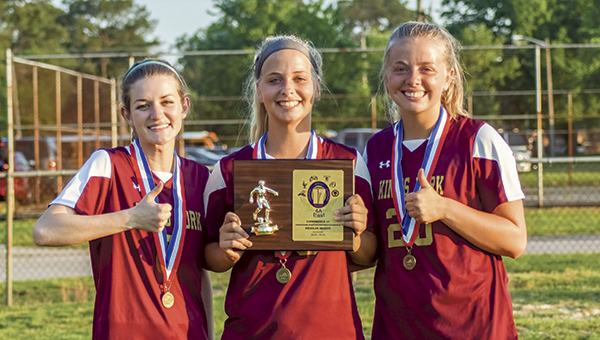 The Lady Bulldogs’ Logan Montel scored two goals, Cydney Nichols scored one, and Rebecca Washburn had a goal and an assist. But it was the Lady Bulldogs defense that ultimately won them the game by shutting down one of Great Bridge’s elite scorers, who pulled out a hat trick for the team’s only three goals.

“One of my midfielders, Hannah Marston, and defender Olivia Blust basically were responsible for applying good defensive pressure to her not allowing her to score anymore,” coach Mike Marston said. “They both did a fantastic job on her in the second half.”

Marston described a key moment in the game coming out of halftime, when the teams were tied 3-3 and Great Bridge was about to get a ball to go in the goal. Nia Nickerson headed the ball off of the goal line, leaving way for Skylar Wall to clear the ball out.

“That was significant because it would have put them up 4-3 at the time, but it really took the wind out of their sails and gave us the energy to score the game-winning goal,” Marston said.

The Lady Bulldogs started their season off slow but were able to turn it around just in time for the conference tournament.

“They’ve really been playing well these last five matches, so it seems that all the hard work we put in and the tough schedule we faced has made us stronger as a team,” Marston said.

King’s Fork, a 4A team, has played a lot of its matches against 5A and 6A teams. As a result, the team has gained a lot of experience going into the conference tournament.

“We have an extremely talented nucleus,” Marston said. “Every player on our team plays minutes in the match, no matter how difficult the opponent is, and they have all been productive.”

The Lady Bulldogs will play the semifinal match at 6 p.m. May 25.