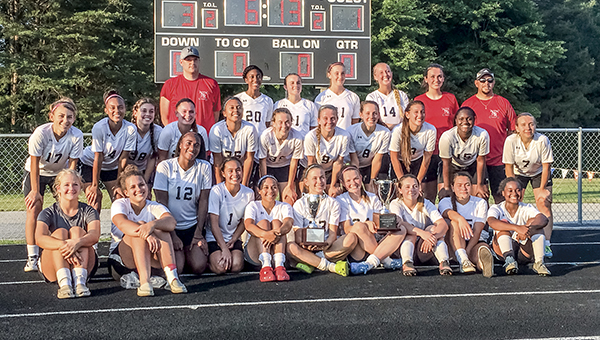 The Nansemond River girls soccer team beat Menchville 3-1 to win the PenSouth 10 conference tournament on Thursday. The Lady Warriors’ next game will be against Princess Anne High School on Tuesday.

The Lady Warriors led a unified stance against Menchville despite suffering from injuries early on.

Coach Kurt Straub realized that his girls were put in an unusual situation during the game but was proud at how they handled it.

“One of our midfielders tweaked her leg, and we had to grab girls who were coming off the bench to play the rest of the game, that was pretty big,” he said. “We also had to sit out one of our defenders for pretty much the whole half. Missing two starters on the field at the same time is usually something you don’t do.”

Straub described a pivotal moment in the game, in which his team scored first with 15 minutes left in the half, then got two quick goals afterwards, making it 3-0 at halftime. Menchville scored after the half, but that was just what the Lady Warriors needed to get back in the groove.

“Second half, we came out a little flat and they got a goal on us, and I think that was the wake up call the girls needed to pick it up,” Straub said.

This was the second time that the Lady Warriors played Menchville, and coming into this game, they pretty much knew their weaknesses. Straub said that his team played its game plan in the first half but slacked off in the second due to injuries, only to come back and tighten it up in the end.

The Lady Warriors will be playing Princess Anne high school in regionals on Tuesday.