Chris DeFreeuw wasn’t aiming to be valedictorian for Lakeland High School’s Class of 2016. 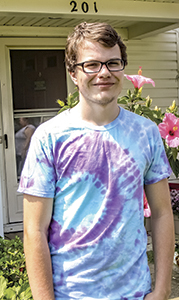 Chris DeFreeuw is the valedictorian for the Lakeland High School class of 2016. He is a musician and plans to study music education in college.

One of his older brothers, Jonathan DeFreeuw, graduated fourth in his class at Lakeland in 2013.

“My real goal was to be third,” Chris DeFreeuw said. “I just wanted to beat him … and that way, I wouldn’t have to give a speech.”

But DeFreeuw, 18, surpassed his goal.

He graduates from Lakeland with a 4.51 grade point average on June 11 and is still mulling over the messages he will deliver to his fellow graduates that day.

DeFreeuw, who plays the tuba in Lakeland’s marching and concert bands, plans to study music education at Bridgewater College this fall. Eventually, he hopes to earn a master’s degree in music performance.

Other than a recorder in elementary school, DeFreeuw never picked up a musical instrument until he joined his middle school band in seventh grade. It was a DeFreeuw family rule that all four kids had to spend at least one year learning to play an instrument of their choice, he said.

“Music clicked with me,” DeFreeuw said, adding that he never had formal lessons outside of school. He has performed with the school’s regional all-district band and the Virginia Youth Symphony Orchestra and auditioned for the All-Virginia Band, which is made up of high school musicians from around the state.

DeFreeuw said he also appreciates the opportunities that Suffolk Public Schoools provides for the city’s middle and high school bands to come together and perform collectively at events. That doesn’t happen much in other local school divisions, he said.

DeFreeuw said he has drawn career inspiration from his former band directors and music teachers.

“They introduced me to music,” he said, adding that he wants to work with middle or high school students. “I want to be able to do the same for other people.”

DeFreeuw said he hopes to challenge his fellow graduates to “rock their worlds.”

“Set goals that will make everybody laugh at you,” be said. “Dare to do the unexpected.”

Less than three weeks remain for candidate hopefuls to collect and turn in signatures to be listed on the November... read more