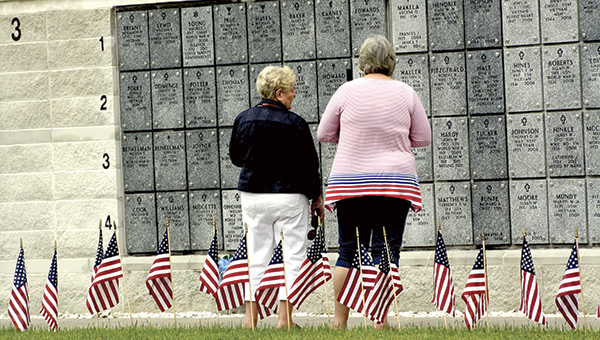 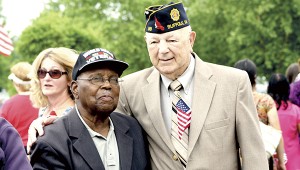 “It makes me remember the guys who died,” said Ewald, adding that he had to take breaks when recording an oral history of his military service recently.

“It was hard seeing people wounded … and not to be able to help them,” he said. “War is no place to be.”

More than 1 million members of the armed forces have died defending the freedom of the United States, Rhoads said. Most of them were under age 25.

“These fallen heroes are not just numbers,” Rhoads said. “They were real people, from real families and real communities.

“The children of our fallen warriors still miss their parents,” he said. “Parents are still missing their sons or daughters who died way too early.

“Nobody can replace a fallen hero, but we can offer a shoulder to cry on, educational assistance and an assurance that their loved one’s sacrifices will not be forgotten,” Rhoads said. “Our freedom was not free. It was only possible because these heroes paid the ultimate price.”

After the ceremony, several people in the crowd stopped to shake hands with Ewald and Morgan and thank them for their military service. 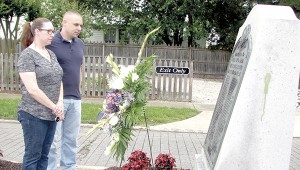 Bradley and Sharon Heisler visit the World War II memorial at Cedar Hill Cemetery on Monday. A ceremony at the event, hosted by the Norman R. Matthews Post 57 of the American Legion, was canceled due to weather, but the post still placed wreaths at the memorials, and many people visited throughout the day to pay their respects. The Heislers are Suffolk residents and are both on active duty in the U.S. Navy.

As they left the ceremony, many families stopped to pay their respects to family members buried in the cemetery. Some left flowers or a balloon; others paused for several minutes, with many taking cell phone pictures of their loved one’s headstone.

“We came to see my father,” said Louis Warren Jr., walking with his mother, Eva, to the grave of Sgt. Louis Warren Sr., who died in November 2011.

Glancing at his father’s marker, Warren spotted a single penny left atop the marker.

In the United States, the tradition of leaving coins at military gravesites started after the Vietnam War as a way to communicate indirectly with the families of deceased soldiers.

Different coins have different meanings. Leaving a penny means that you knew the deceased; a nickel, that you trained in boot camp together; a dime, that you served in the same company; and a quarter, that you were with the deceased when he or she died.

Elsewhere in Suffolk, the Norman R. Matthews Post 57 of the American Legion canceled its annual ceremony at Cedar Hill Cemetery due to the weather. It still placed wreaths at war memorials in the cemetery, and several people took advantage of a morning break in the weather to view them.

At Carver Memorial Cemetery, roughly 300 people came out to attend a ceremony and visit loved ones’ graves. The ceremony included a moment of silence for fallen veterans, music by the Pearly Gates and an address by Pastor Marc A. Thomas Sr. of New Community Temple Church of God in Christ.

“Everybody becomes family, so they can support one another,” said cemetery manager Gail Turner.

Cancer patients in Suffolk and Western Tidewater may soon have access to more targeted radiation treatments without the long drive... read more