The Nansemond River High School girls’ tennis team lost in the state tournament 5-0 to the Thomas Jefferson School of Science and Technology. 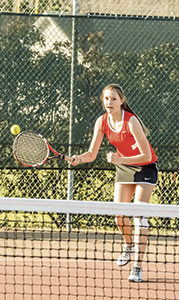 Cydney Folsom competes for the Nansemond River High School girls’ tennis team earlier in the season. The team progressed to the state tournament, and two of its three losses on the season came to the two teams who will compete for the championship. (Melissa Glover photo)

The Lady Warriors faced an experienced team in Thomas Jefferson. They were also short-handed, missing their No. 2. Nevertheless, there were some standout players that showed up for Nansemond River.

Coach James Riley said, “Erin Bonney actually played very well against their No. 1, and Ariana Samuel scored quite a few games. I think she won the most games in the match against her opponent.”

Riley said he could tell Thomas Jefferson had players that were year-round tennis athletes.

“They are a really good team, well talented.” Riley said. “Our girls played very well with the talent level they were playing against. It comes down to court experience; they just happen to be on the court more.”

Two of the three losses in Nansemond River’s season came from the two teams that are going to be playing for the state championship on Saturday.

All in all, Coach Riley felt like it was a good season for his team.

“Overall I feel like the season was very successful,” he said. “We won our third conference championship in a row. We were the regional runner-up, which was the first time we ever made it to the regional championship. Then, losing to a team that I expect to win the state championship and making it into the state tournament — which we were one of the final four teams — I couldn’t be more than delighted.”

Next season, The Lady Warriors return pretty much the same lineup except the loss of one senior. Riley believes that if his girls start off next season like they did this year, they could go even further into the state tournament.

“ I told the girls, if we come out and play the way we started this season off, we should go undefeated into tournament play next year,” Riley said. “I’m proud of their play.”