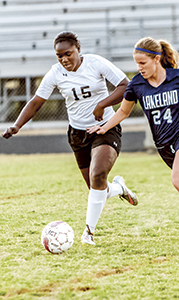 Daijah Norris, a forward for the King’s Fork High School girls’ soccer team, competes against Lakeland High School during a prior game. She was one of 10 team members honored with all-PenSouth conference honors.

Coach Kurt Straub said he is proud of his girls for their achievements.

“I feel pretty good about it,” he said. “Being the new team in the conference, I was kind of unsure about how it was going to go, being that we were the only outsider, but it ended up pretty well,” said Straub.

Jewette, Robinson and Webster are all captains for the Lady Warriors and play in the midfield. Hunter and Norris are both forwards, and Straub sees them as being a duo that can make things happen.

“They feed off of each other,” Straub said of Hunter and Norris. “They work well together, and I think combined they have a total of 34 or 35 goals.”

“Sage had a concussion the first half of the season,” Straub said. “She didn’t actually start playing until conference, so for her to make second team and just start playing at conference is a big accomplishment.”

Lynch and Rhiel are both freshmen along with Sullivan.

“I have three freshmen, one made first team and two made second, so our future sounds promising.”

Janek and Webster are the only two seniors to receive honors on the team.

“It’s going to be a big spot to fill, towards the end of the season they were playing the same spot, sharing time, so now I have to fill that spot,” said Straub.

“I had some people who I thought should have been put on first team that were put on second team, but that goes back to the voting of the coaches and being that we are the new team in the conference, makes it more difficult,” Straub said.

Better because of their service

EDITORIAL The days of room mothers bringing cupcakes to classrooms may be long gone, but that doesn’t mean there’s no... read more